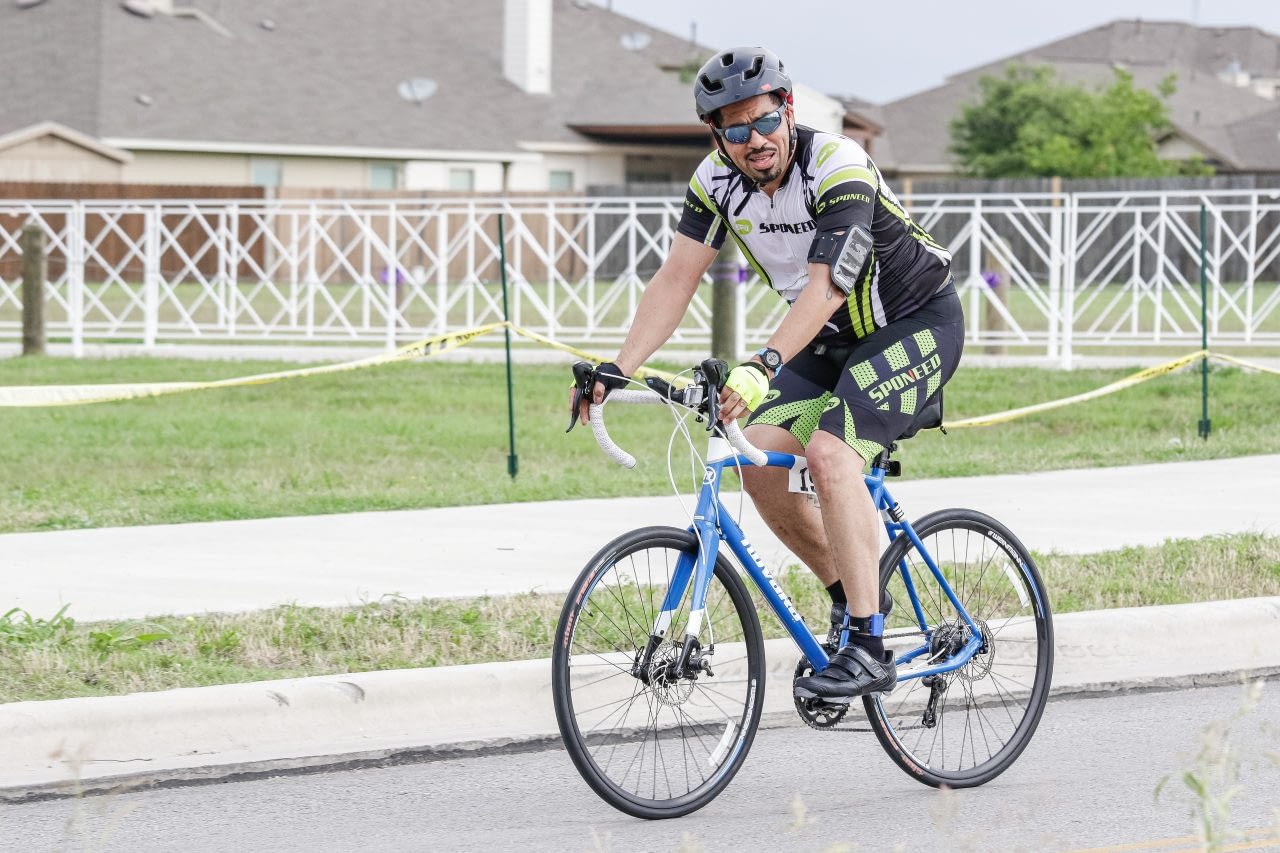 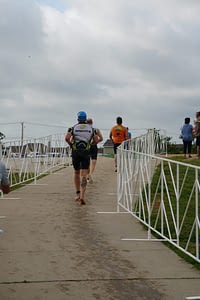 Get out of the water and get that ass in gear!

After the swim, we made our way to the transition area (T1). This is the place where racers switch disciplines. In T1 we “transition” from swimming to cycling.  Some will run from the water to the bike. Others take their time because, well, they are already tired…..and questioning their decision to do this thing.  I oscillated between both mental states. Fortunately, I had my support team (wife and son) who kept calling me an old man and asking why I was moving so slowly.

She knew how to push my buttons. Pride is a bitch.

My early morning arrival was a good decision. I placed my bike in an easy to remember location. I learned the importance of this the hard way. Last year I set up my bike and never looked back or made a mental note of its location. Consequently, when I entered T1 I didn’t have the presence of mind to stop and look and think about where it might be. I ran around like a chicken with its head cut off. Back and forth, back and forth, I probably ran right past my bike several times. I must have lost two or three minutes just locating it. In addition to losing time, I lost momentum and the frustration demoralized me for a little bit. Not to mention the embarrassment.

This time I was prepared. I knew where to find my bike and I had a new gear bag. One that was easy to spot, it was blue with yellow bananas on it. Absolutely unique among the hundreds of gear bags in the transition area. A big thanks to my support crew for that idea!

Coach told me several times ‘put your helmet on first’ (to avoid accidentally leaving the transition area without it and being disqualified). Everything else is secondary to that. So, that’s what I did. From there, I put on my extra-padded bike shorts then dried my feet. Everyone knows that putting socks on wet feet is a fool’s endeavor. Some people ride without socks. I am not one of them. I also ride with padded gloves. I don’t have a “Tri Bike” or aero bars on my road bike. This means that during the majority of my riding I’m sitting upright and that puts a lot of pressure on my wrists. The pads help by reducing the discomfort that develops during a long ride.

I was able to get out of transition in 4 min 54 seconds. That’s pretty slow.  I felt like I was moving quickly.  Clearly, I need to practice getting in and out of T1. For perspective, the top 5 racers were in and out of T1 in 1 min or less… There is lots of room for improvement here.

I hit the road full of enthusiasm. 18 MPH was my desired pace. At that speed, I would get through the course in about 47 min.  I was aware of the hills and that I would even struggle with them. At home in Houston, I didn’t train for hills…at all. I assumed the flat and downhill portions would compensate for my decreased speed on the hills…..

I was very wrong…I didn’t account for muscle fatigue as I progressed through the course! Another rookie mistake that bit me in the ass.

The first 7 miles went well… or so I thought. I was pushing really hard, trying to leave it all on the course. Then suddenly, I began to get nauseous. I really felt sick. I was unsure if I should pull over and vomit, keep riding and vomit, stop and catch my breath or just push through. I chose to slow down and see what would happen. Johnny always tells me when I’m on the course, I must keep moving (stroking, pedaling or running). I was very reluctant to stop. I really, really didn’t want to vomit. I didn’t have any fluids on my bike and throwing up is just gross.

A few miles later, the nausea was in the background….getting enough air took precedence. I didn’t realize it, but I was riding in my anaerobic zone and had too far to go with too little physical conditioning to keep up that pace. I backed off the effort. I think I scared myself and it became too difficult mentally to push hard again. That’s a clear penalty for inexperience.

I averaged about 13 MPH during the last 4-5 miles. The feeling of frustration and disappointment were weighing heavily on me.

With about 2 miles until the turn into the transition area, I struggled to pedal faster than 10 MPH. My hamstrings were cramping and my calf muscles felt like baseballs. At least I did what Johnny asked me to do. I left everything on the bike. However, I think I did it incorrectly.

To my surprise, there were moments during the ride that I had the presence of mind to enjoy the scenery. I remember noticing the old barns, rolling hills and wondering if there is high-speed internet access at these homes.

With all of my rookie mistakes, I completed the course in 55 minutes with an average of 15.16 MPH. I’m pleased with that result.

I think a big part of endurance racing is dealing with the unexpected. How do you keep your mind and spirit in the game when unexpected situations arise?

Fighting through the brick

At the end of the ride, I was worried about my ability to run. My quadriceps were on fire, my hamstrings were cramping up with each turn of the pedal and my calves were twitching like crazy.

When I jumped off of my bike to walk into the transition (T2) I almost fell down. Each step was agonizing. The immediate goal was to get my cycling gear off and my running gear on without cramping into a little ball.

Knowing that the run was the last part of the race, I got a burst of adrenaline and renewed motivation to push through the pain in my legs. One benefit of the slower pace at the end of the ride was that I caught my breath.

Just like training, the first quarter to half-mile of running after a long ride is difficult. The leg muscles feel like they’ve forgotten how to fire. The legs feel 5x heavier than normal and the effort to move them is immense.

The trick I was told is to take small rapid steps. So, that’s what I did while trying to stop the calf cramping…

in my final post on this race, I’ll discuss how I got my legs back and made it to the finish line. I’ll also share the final results of the race.

A frustrating 55 mile 🚴🏽‍♂️ ride with the A-groupers

Being a race volunteer