The morning of Jan 19, 2020, was cold (~45°F). I was in bed by 9:30 but hadn’t slept for more than 3 hours. Although I didn’t feel anxious, my mind was racing and visualizing all sorts of race-day scenarios. Visualization before an event or important activity is a regular practice of mine. Except, last night, my mind was on autopilot. I was not visualizing with intent. My mind felt like it was out of control. After fighting and failing to shut down, I decided to let the thoughts flow freely. By 2 am, I knew that the battle was lost. I drifted in and out of a light, restless sleep until 4:30.

At 4:30 I got up to eat some oatmeal and a banana and have a cup of coffee. I didn’t feel sleepy, but I was concerned about how the lack of sleep might impact me later in the day. The race was scheduled to begin at 7 am and I was in the last wave and didn’t expect to cross the starting line until 7:45 am. Our first priority was to get a parking space near the convention center (Race HQ). I assumed that the place would be very chaotic. So we left early to try and beat the crowds.

We found a parking lot across the street from the convention center and I went inside to drop off my gear bag. The gear bag was given to us when we picked up our race materials and contains all the stuff we want to have immediately after the race. I chose to put a pair of flip flops, fresh socks, a change of clothes (shorts & t-shirt) and some recovery nutrition. Although the race wasn’t scheduled to begin for 45 min, I decided to stay in the convention center where it was warm and just wait for instructions to go to the start line.

While waiting, the nervousness activated my GI tract 😲. The port-a-John lines in the convention center were exceedingly long. I had to go outside and find a shorter line…the clock was ticking 😱.

On the way to the D-corral (my starting group), I passed multiple port-a-johns, but the lines were deep. At least they had plenty of them. While waiting in the back of my group, I was able to take care of my business and relax.

My day had arrived. I was cold but ready to run. 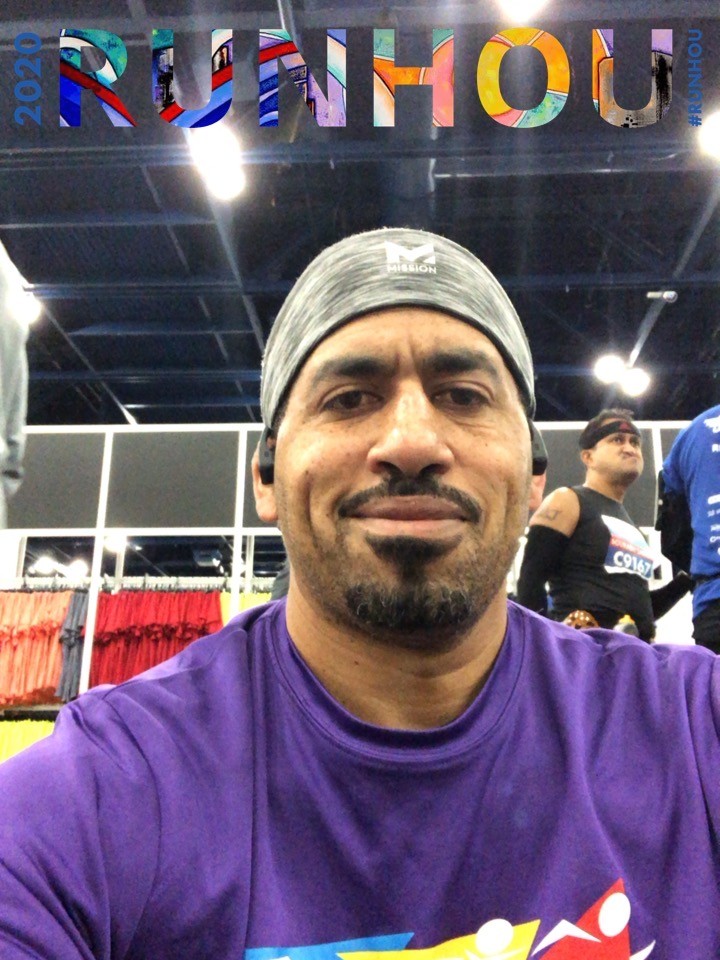 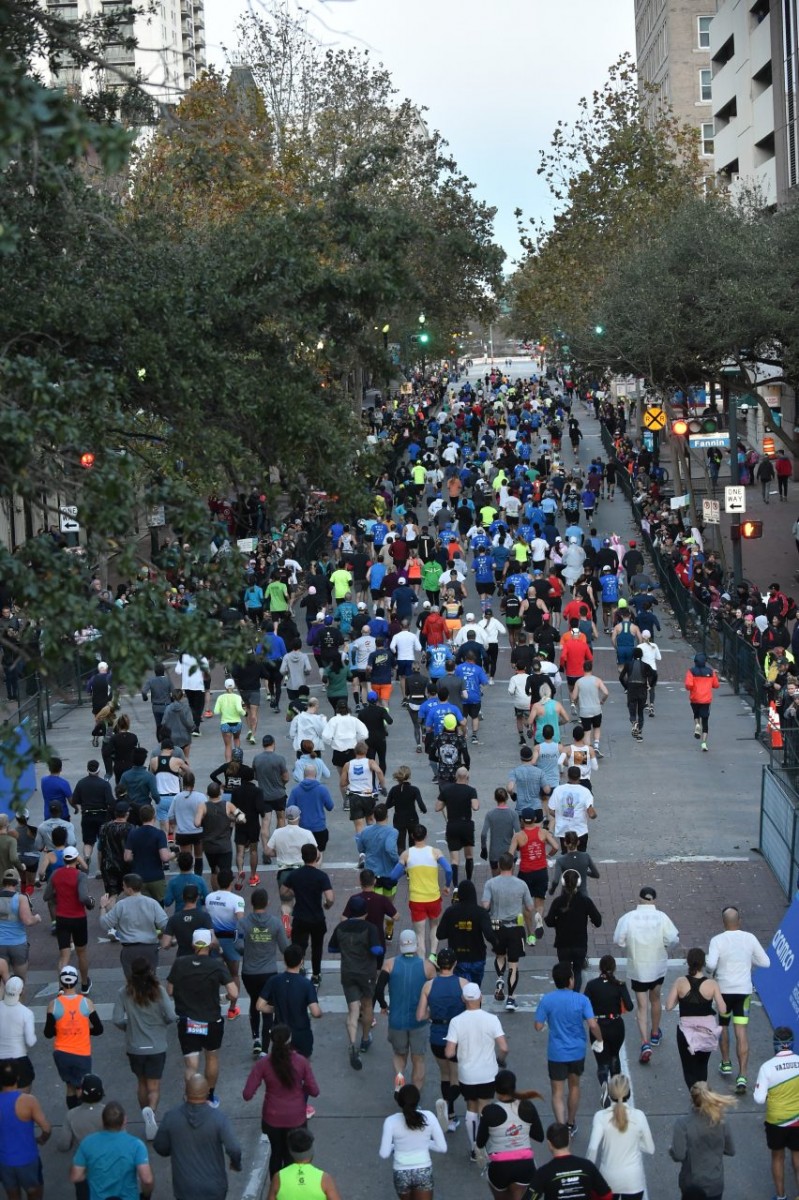 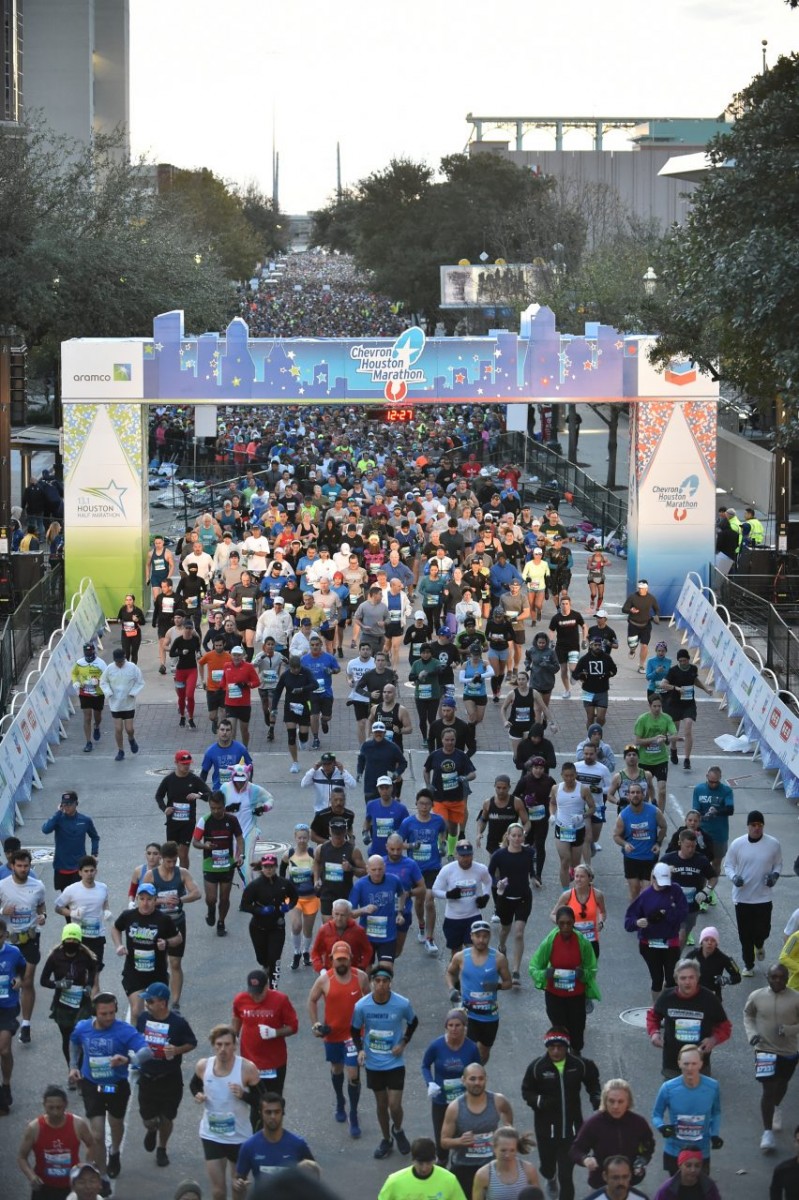 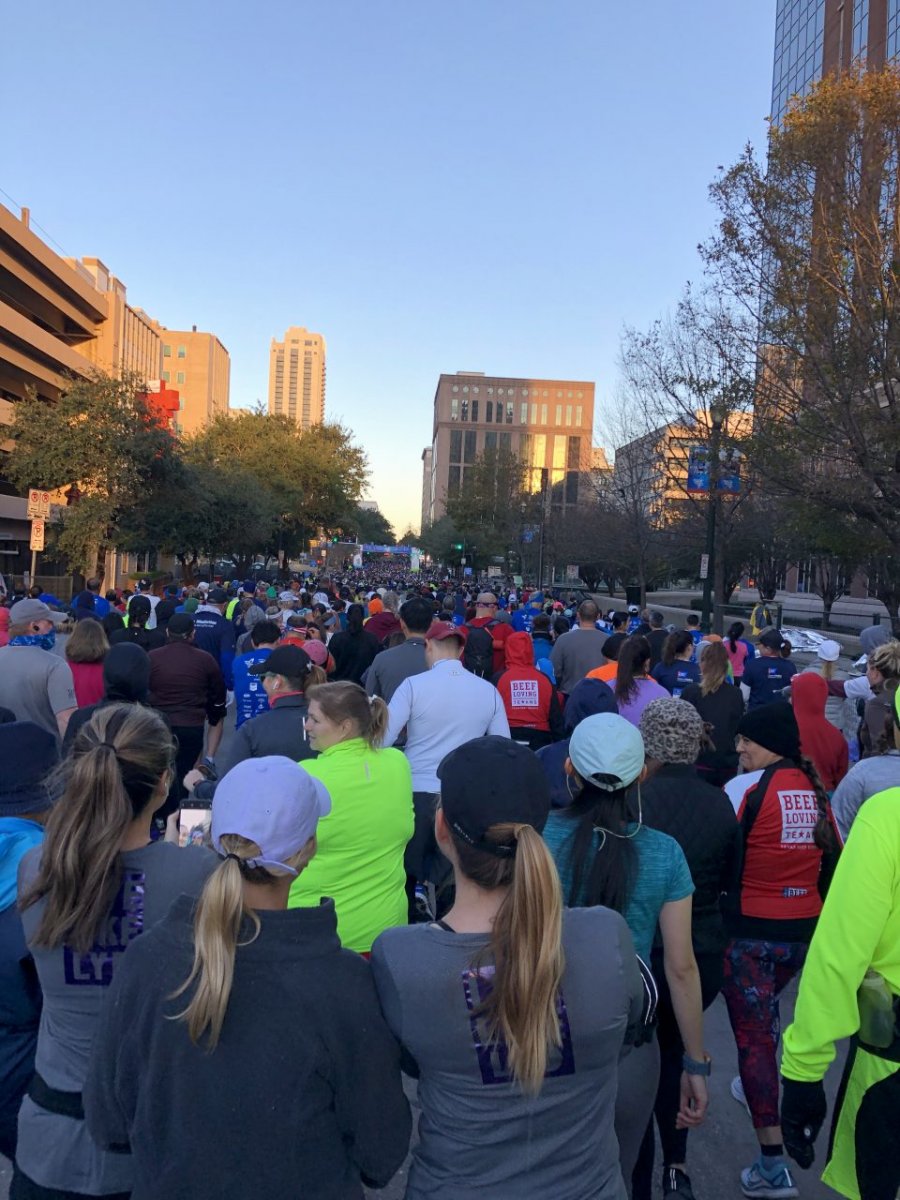 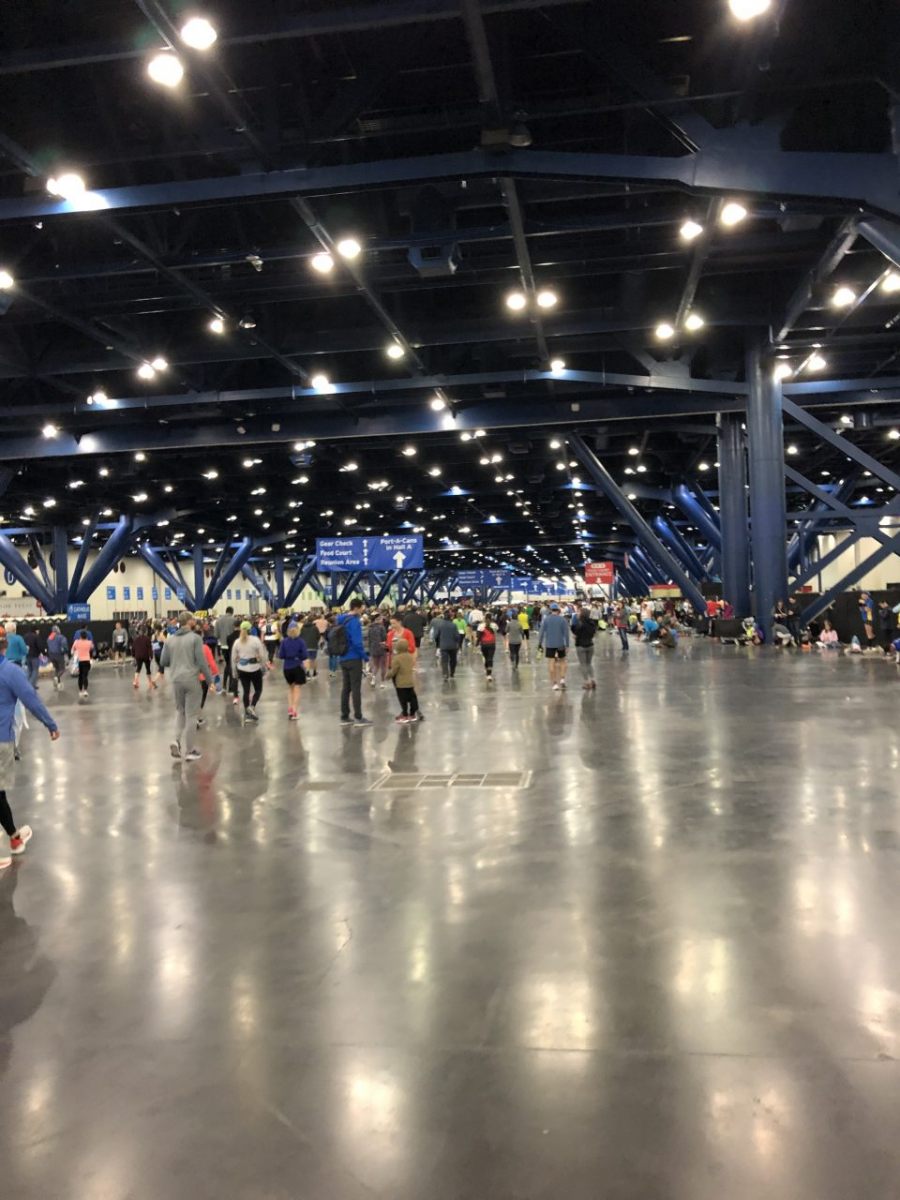 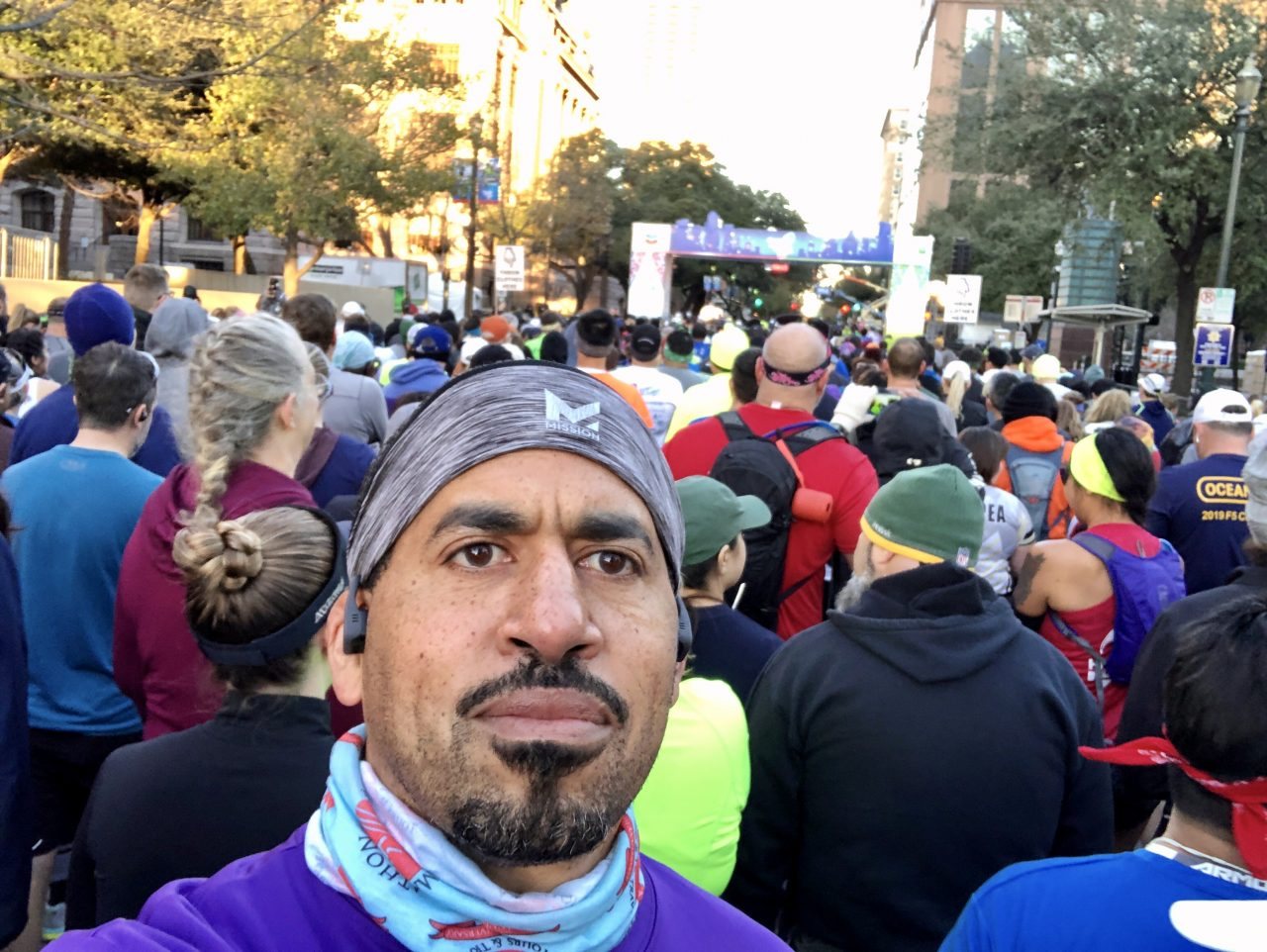 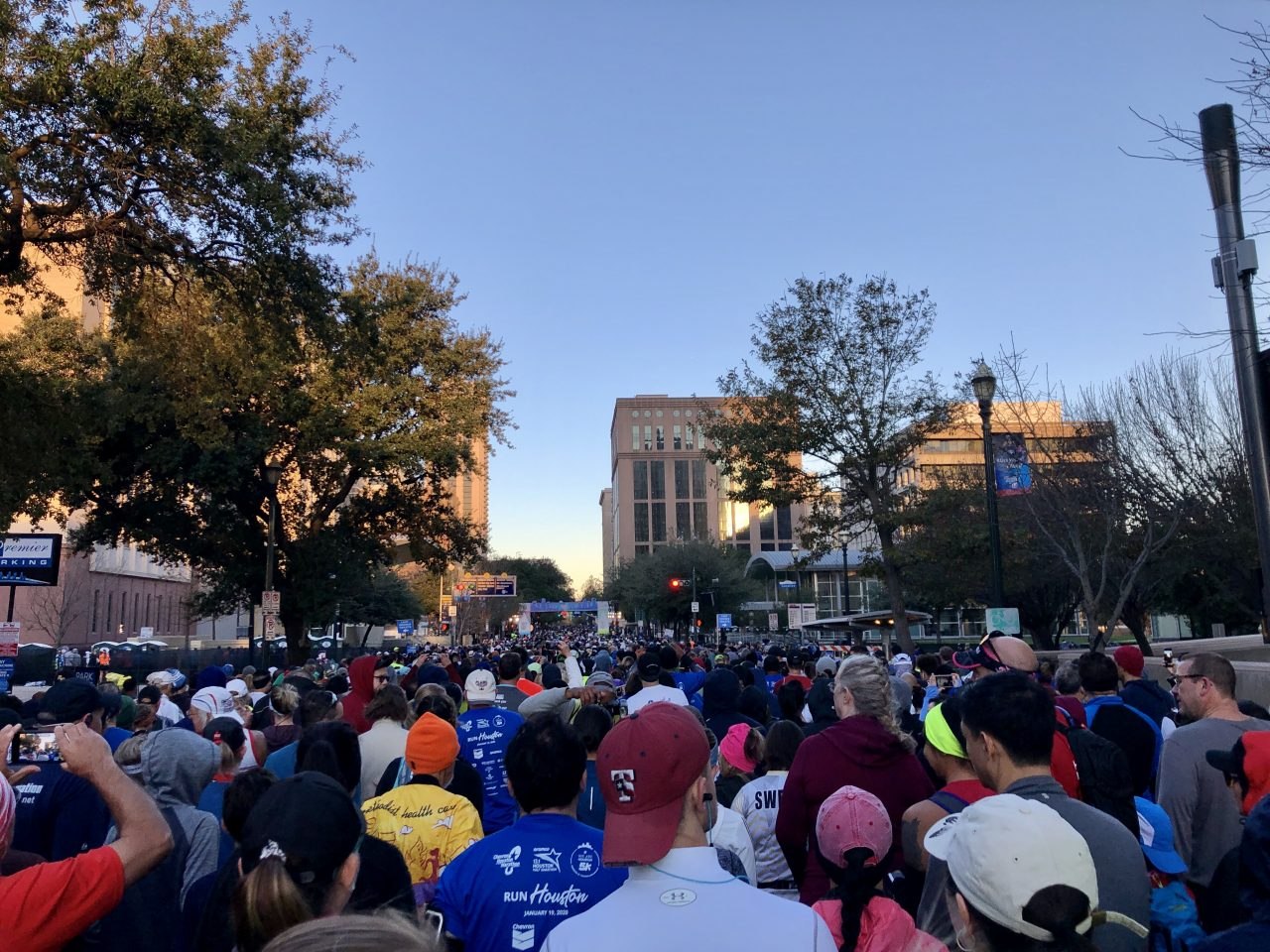 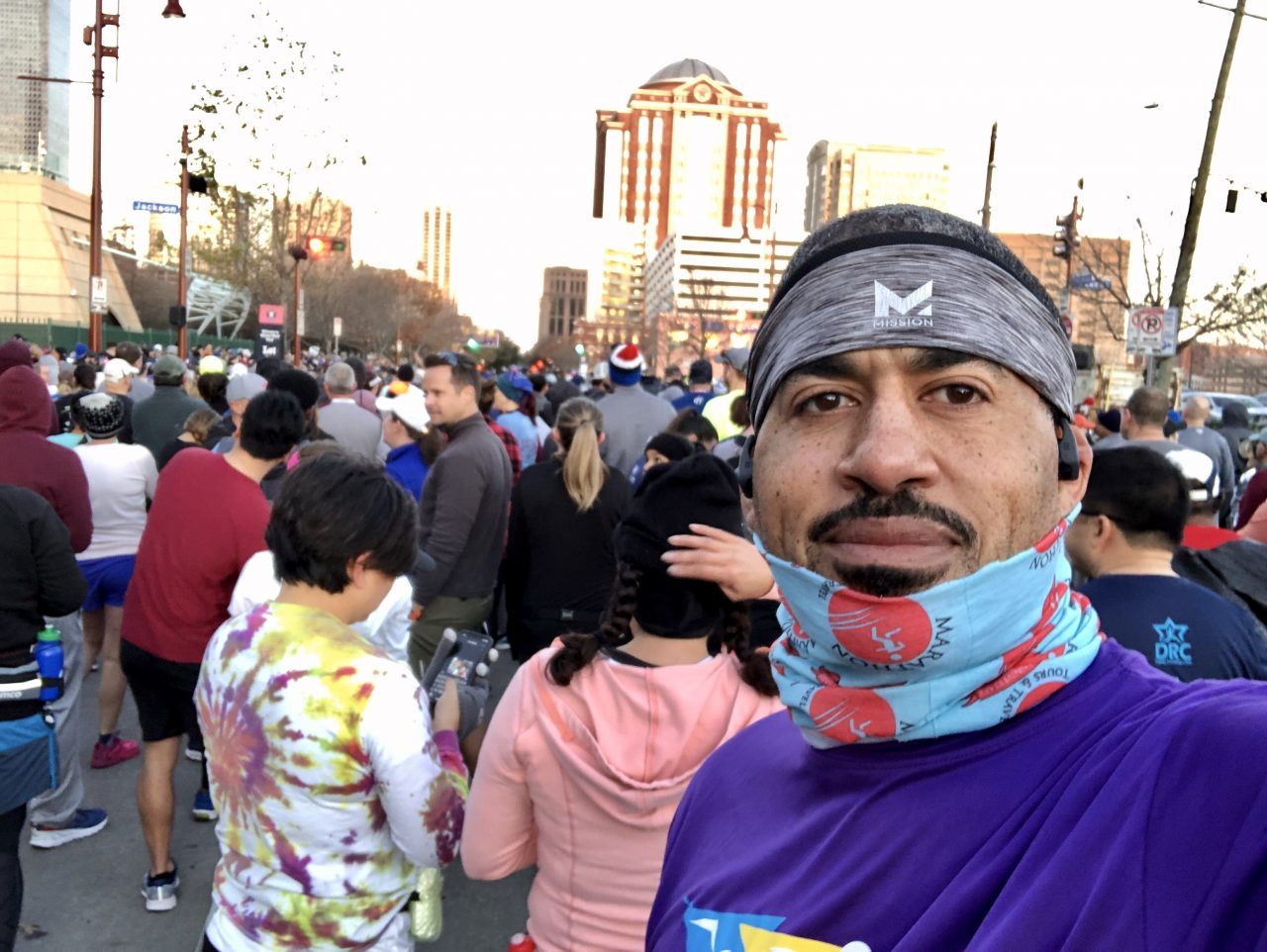 Unlike a triathlon, marathon runners are allowed to wear headphones. I like to lose myself in the music when I’m running, so I brought my Aftershokz Titanium bone-conducting headphones. With about 27,000 runners & all of the spectators in one place, spotting my “support team” was damn near impossible. Fortunately, we were able to talk by phone and coordinate our meeting spots.

We were stratified by race pace and organized into four groups, A-D. A being the professionals and fast amateurs, B, C, and D becoming progressively slower. I was assigned to corral D which resulted in us crossing the start line about 45 min after the A group started. The pros were about 10-miles into the course as we were beginning the race which tickled me.

The crowd of people in my corral was high spirited and friendly. I met many first time runners and a few super-veterans. One woman asked if this was my first marathon because I was taking so many photos. She laughed and said, I’ve done 47 marathons, eventually, you won’t care to take any more photos, then waved as she ran ahead of me.

The temperature was cold and the wind was blowing hard. My body felt stiff as I began running. Normally, I feel like my legs are loosening up around a half-mile to a mile. When I got to two miles, I still felt stiff. I was eager for the sun to rise and warm my body.

The energy of the crowd was fantastic. People were standing in the cold, holding witty signs and cheering for a gaggle of strangers. Why can’t we randomly cheer for one another every day?

I felt particularly moved by the itty-bitty kids who held signs and repeated the chants of encouragement. I made a point to make my way over to as many children as I could, give them a high five and tell them thank you for cheering. For those with the “touch here to power-up” signs, I touched them and got a little extra charge.

The aid stations (water, Gatorade and snacks) were manned by teenagers who seemed to actually be enjoying themselves. They smiled at everyone, clapped and tossed out random “you got this” and other encouraging phrases. I thanked them too. I’ve read that true joy is achieved in the service of others. I’m not certain those kids were feeling pure joy, but they did look like they were lost in the moment and having fun with the rest of us.

About mile 5 is where I ran into Ben and Allie, two Ironman triathletes that I occasionally train with. They were running together and doing the run-walk technique. Their pace was slower than what I’d been running (~12 min/mile), but I decided to stay with them for a while and enjoy their company. Besides, suffering together creates bonds. We will all do the Galveston half Ironman and Allie and I will do the full Texas Ironman, so why not spend time getting to know each other?

We chatted and laughed the whole time. Then we seemed to have snapped out of a daze when we realized that we were at mile 9 and didn’t realize that we’d run 4 miles in what felt like 10 minutes. We chatted on until we reached the 12-mile mark and split off from the half-marathon runners. At this point, Allie let us know that her knee injury was becoming a big problem. She and Ben debated the merits of pushing through vs stopping early and reducing the chance of creating a season hampering injury. She’s an Ironman and had never “tapped-out” of a race, so the mental struggle was real. This race was only a “B” race, not one of her “A” events, so risking injury didn’t make a lot of sense. With endurance, walking the line of suffering and knowing when to listen to your body is ever-present. I watched her navigate it. She ran about one more mile then decided to stop. We left her at a medical tent.

Ben and I ran together then he began having foot problems and he decided to stop at a medical tent to get evaluated. I left him there. He said “I’ll catch up in a little bit” as I ran off. That’s the last I saw of him that day. He decided to stop too.

I was going to run the last 11 miles alone…

2hr Z2 🚴🏽 + 1hr z2 🏃🏾 ✅.
Today’s focus was fueling. Pre-ride, on the bike then proper recovery. Getting all three has been difficult for me. Today I think I got it right and I felt electric ⚡️ from beginning to end 👏🏽.
*
I love all this shit!
*
#triathlontraining
#blacktriathletes
#ironchris
#ironmanchris
#prostatecancerawarenes
www.journeyto140.com/blog ...

This morning’s sunrise session was wonderful. Some bendy-stretchy 🧘🏾‍♂️ time mostly working on my hip and shoulder mobility 💪🏾. Of course I enjoy watching the sun move across the trail 🏃🏾 🌅.
*
I love all this shit!
*
#triathlontraining #yoga #yogapractice #yogaeverydamnday
#blacktriathletes
#ironchris
#ironmanchris
#prostatecancerawarenes
www.journeyto140.com/blog ...

Sunrise bendy-stretchy 🧘🏾‍♂️ #progress - 1st time getting into an elbow handstand 🎉😁. It was totally rushed and uncontrolled because I wanted it so, so badly that I did whatever I could to get it done #impatient. Now, I’ll slow down and develop the strength and exercise control to flow into the pose properly.