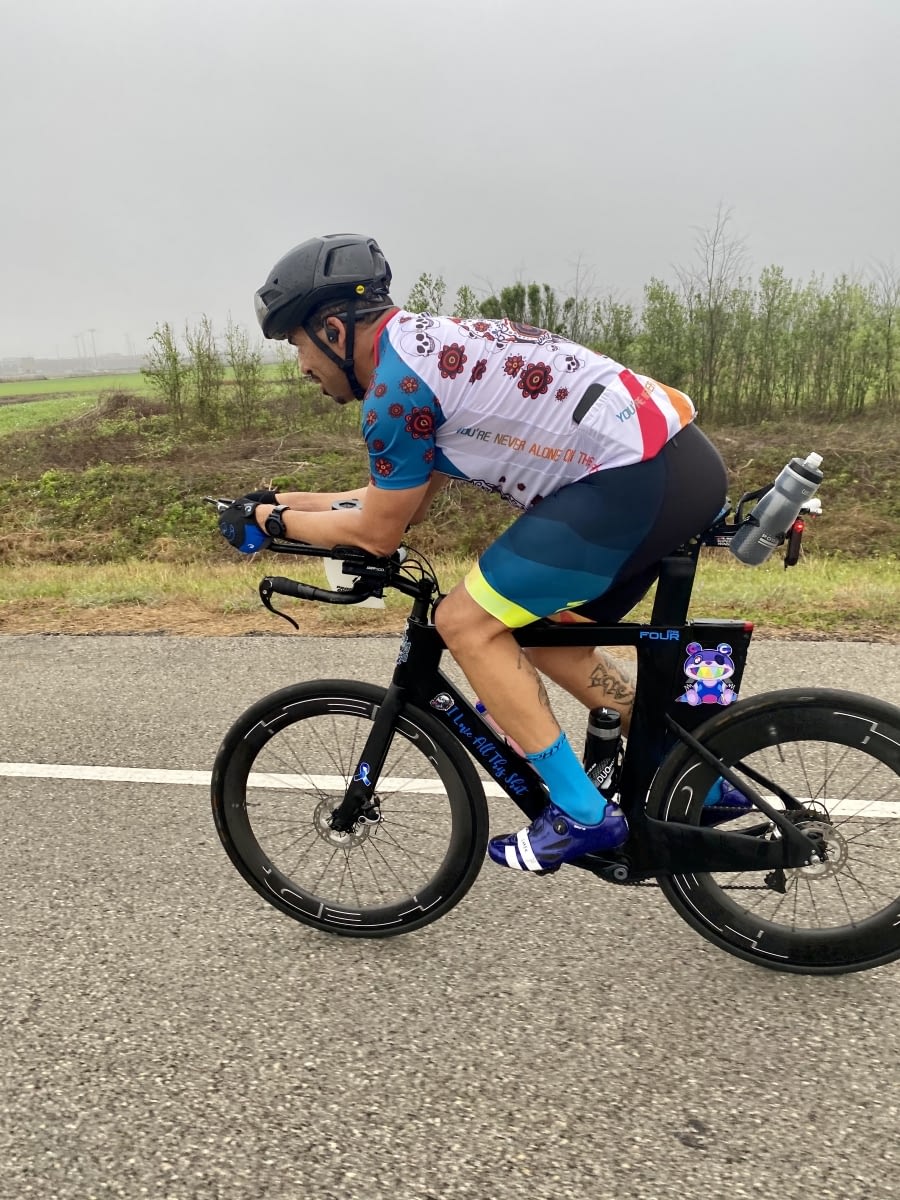 In previous posts, I’ve mentioned my underlying fear and uncertainty about pushing hard and giving my all. Finding the courage to go beyond what I think is possible. I thought this fear was holding me back as a runner. It turns out that my self-doubt is much more pervasive than I have been willing to acknowledge. It seeps into all of my thoughts around performance and how much more I can achieve.

The ride was a race rehearsal for Ironman Galveston 70.3 which has a bike leg of 56 miles. We were going to do 3.5 laps of a 16-mile loop at race pace or better. I’m not registered for the race, but I didn’t want to waste the opportunity to face my fears and show myself what was really possible. Mentally, I committed to pushing hard until I bonked and had to limp home or finish, those were the only two options. Either way, I would actually test my perceived limits rather than imagine what they are.

We began about 7 am which is slightly before sunrise. Overcast skies, strong wind gusts from the south made for a chilly start. I learned my lesson last week and dress for the latter part of the ride, not the beginning when you are cold. Overheating is a major performance drain. After reviewing the route as a group, we ended up leaving in smaller teams instead of as one big group. The roads were damp with new rain so creating more space between each rider was the safest approach.

I left in one of the earlier groups and began riding hard fairly quickly. Typically, I’ll ride easy to warm up for 20-40 minutes, but not today. Today was a race to get to the finish as fast as possible. My objective was simply to ride past my normal limit of “comfortably hard” which is typically 200 watts or less. I found that I was maintaining 230 watts with very little problem. Halfway through the 1st loop, we passed two of the riders that left ahead of us, and that juiced me up. As I passed each of them, I ended up riding with increased power. I got to the point where I was riding at 300-350 watts without raising my heart rate about 151 bpm.  My legs felt great and I was breathing easily.

During the second loop, I recognized just how strong I was feeling and that the expected fatigue hadn’t materialized, so I kept cranking. Increasing the watts and paying attention to how my body (and legs) felt with the increased effort.

30 miles in, strong winds, higher sustained effort, and still no signs of fatigue. My mind kept trying to caution me telling me to ease up, that I’d done enough.

Towards the latter part of the second lap, I saw the fast riders in the distance behind us. Cruz said here they come, they are going to catch us. I said, yep, I see them. I then thought to myself, they are going to have to earn every inch of the gap between us today.

With a renewed determination and sense of competition, I pushed hard knowing the last lap and a half was going to be where I would begin to deal with the suffering. I looked forward to that moment. I knew that everything leading into the struggle was the warmup. In the midst of pushing through the sufferfest, when I want to ease up or even quit, is where it really counts. Growth and development are found in those moments. I was mentally ready today.

That’s when I entered my self-imposed suffer-fest. Of course, I felt it, but I was clear about what I wanted to do while there. Fortunately, I wasn’t alone. As I’ve written in previous posts, suffering with others yields an increased strength to persevere. I didn’t want to get left by the other riders nearby, nor did I want to feel like I wasn’t as strong, we were going to finish together. I was pulling (riding in the front) and needed to keep the pace. My legs were heavy and my breathing labored. Determination was fueling me. I was willing to push until my legs simply wouldn’t respond anymore…

At the same time, I was thinking of ways to justify ending the suffering. Telling myself that you worked hard, it’s almost done, lighten up or you should have a cool-down period, it’s important.  NOPE! NOPE! NOPE!  A cool-down is important, and I can do that after I complete the task at hand, not before. I did work hard and will continue until I’ve reached the end of the ride.

I didn’t slow down until I was done, even considered going a few extra miles just because I wanted to quit.  But, I had to pee. Normally, I’d pull to the side of the road and pee in the grass, but today there was a bike event occurring, and too many riders, police, and support vehicles were moving around. Getting to the bathroom before I couldn’t hold it anymore was my new goal. Not yet being able to hold my bladder for very long is my reminder that the surgical recovery is ongoing.

As I rolled into the parking lot, my watch told me that I’d achieved a new FTP and several other milestones!

I couldn’t be happier with my effort today. I acknowledged my fear and then punched it square in the fucking face. Besides the willingness to address my fear and uncertainty, I would not have been physically able to achieve this today without the recent changes in my diet. I’ll write about those in a separate post.

A new level has been unlocked…

The best stats I’ve ever achieved on a ride this long (half ironman distance): 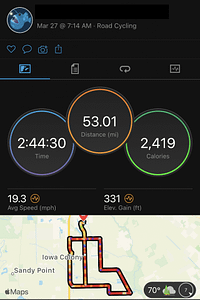