For me, developing the discipline to maintain my weekly training regimen while I’m on the road has been a huge hurdle. I’m frequently on a plane twice a week. This week was particularly challenging. I was going to be on the road for 5 days and staying in 3 cities.

I stayed downtown at the historic Drake Hotel. Fortunately, the hotel is very close to the lake. The lakefront running & biking trails were easily accessible….reducing the barrier to running. I really didn’t want to run on a treadmill in the hotel gym.

I lived in Chicago early in my life and I would often go to the lakefront. Being able to run to and from Navy Pier was pure nostalgia. I put on my running gear, including my new Garmin Forerunner 945 put my room key and driver’s license in my pocket and headed out for a morning run.

The tide must have been high because as you can see in the photo above, a part of the trail is underwater. Regardless, there were plenty of people out moving their bodies. It wasn’t crowded, but I never felt alone either.

My plan was to run for 1 hr which includes a warm-up and cool-down period. I generally end up running about 3.5 -4 miles. Until very recently, I haven’t been able to run for a solid hour. I would generally stop and walk at about 1.5 miles. Walk a bit then start running again. Now with some focus, I’m able to run the entire hour. It’s not easy, but I have been able to push through the discomfort.

Today I ended up running down the length of Navy Pier and back. It was fairly empty, the tour operators were cleaning and prepping their boats. There were a few people walking in pairs and a handful of tourists taking photos at the end of the pier. I noticed that I was feeling happy and that I was running with a smile on my face. Unlike the Chicago custom, I spoke to most of the people that I passed. Some replied back, some ignored me. 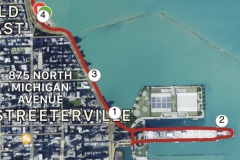 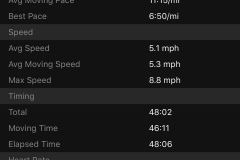 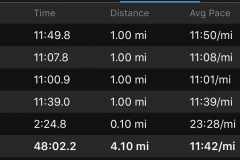 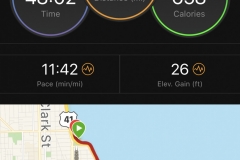 The run felt great. My watch beeped and informed me that I had just achieved a personal best 5K!  The photos above show my progress.

I had a great morning. I’m so happy that I got out and at it.

The power of latent goals