I did it… I completed an Olympic triathlon.

Immediately after completing the race I felt a wave of disappointment that was mixed with amazement, joy, and disbelief. I didn’t feel the sense of satisfaction that I’d imagined. In January, I planned to complete this race and it was going to be the height of my triathlon achievements. It is indeed the pinnacle, but I remained unsatisfied. An unmet hunger remained.

Nine months ago completing a race of this length seemed just outside of possibility. I wasn’t sure if I could even complete the swim, much less the whole race.  But, the extent of my transformation has surprised me. Through dedication and consistent training, not only have I expanded my physical capabilities, I blew past what I thought was even possible. I realize now that I’d arbitrarily created limits around my potential. All of my goals and expectations were governed by those self-imposed limits. In this case, I had limited beliefs about my athletic ability, but now I’m curious where else I’ve set limits on myself.  I believe that removing or vastly expanding my perceived possibilities has profound implications on my life, and that makes me very excited.

Going into the race I sensed that something within me was different.  Instead of anxiety and doubt, I only thought about my race strategy. Finishing was not in question, it was a foregone conclusion. Not once did I even consider whether or not I could do it. In fact, I was more nervous about last week’s Kerrville sprint than this race.

The race was held in one of Houston’s sprawling  Master Planned Communities, a section of Cinco Ranch. To my dismay, the swim was going to be in a man-made detention pond. Those things are typically murky and just icky. They are not places I’d ever voluntarily spend leisure time.  In addition, the water in the lake was warmer than I prefer. I even had flashbacks of my bout with claustrophobia while swimming in warm water a few months earlier.

For this swim, the plan was to pay attention to body my position, stroke rate, and breath timing. Staying clear-headed and in the aerobic zone were the priorities. I registered in the Clydesdale / Athena group and we were the last of the Olympic distance swimmers to enter the water. The race was not well organized. We had a mass start, but there was no official timing mechanism nor a start line. Some even floated forward before the race director shouted go.

Per usual, most started off swimming very hard and seemed to begin struggling within the first 5 minutes. They tend to have no ability to sight which causes them to swim side to side instead of straight. Or, they don’t know how to breathe so they have to swim with their head popped up and their legs dragging which causes them to expend a lot more energy and wear themselves out relatively fast. While watching the others, I focused on maintaining a steady pace with regular consistent breathing. Throughout the swim, I checked for the buoys regularly so that I wouldn’t zig-zag too much. My left arm pulls stronger than my right and I tend to drift to the right. If I don’t pay attention  I will find myself off course.

As I swam through the back-half of the course, I noticed that the sprint racers were starting.

They took off almost immediately as I passed them. They did the same thing as my group, most of them started very fast. I saw them pass me, some even hit me from behind. However, within 200 yards, most were struggling to breathe and couldn’t maintain their pace. I was swimming right past them… smiling to myself.

As I approached the exit to the lake, I felt a tinge of frustration because I knew that at my current pace, I could swim twice the distance and still feel fine. Meaning, I could have gone harder from the start and finished without too much issue. On the other hand, I felt good because I was aware of my technique and breathing during the entire swim. So, I achieved my real objective and didn’t get caught up in racing the other competitors.

Then 26 miles of riding on flatland

The bike course was totally flat, which was good because I fear hills. Why? Because I don’t train for them, I don’t do group rides on them either. Thus, I don’t want to do a race with hills… yet.

Both Johnny and my wife told me waaaayyy back in March that the bike was going to be where I struggled the most. They were correct too.  As I’ve stated many times in my posts, I don’t like sitting on the bike for very long. It hurts my ass a lot. Well, my reluctance to push through the discomfort and build an ass-callus cost me dearly today. I went into the race planning to average 18-19 MPH knowing that I was setting an ambitious goal. Since I planned to hold back during the swim I wanted to go all out on the bike. With a flat course, and ample nutrition I was feeling optimistic.

I went through transition 1 fairly quickly, hopped on my bike and immediately started riding hard. Having driven the course the day before I was feeling confident. We were riding on a well-paved street that was two lanes in each direction separated by a concrete median. The traffic along the route was not blocked off. Instead, the race organizers placed orange cones between the two lanes on each side of the street. Cars on the right and cyclists ride on the left. Unfortunately, the cones weren’t placed evenly or in a straight line. The unpredictability of where the cones were placed resulted in a few crashes. I saw one pretty severe fall where the rider was taken away by ambulance. The setup made it difficult for the faster riders to get enough room to pass the slower ones, so they would just ride in the lanes with the cars then swerve back. I think this aspect of the course needs rethinking.

As you can see in the table below, I rode just below my desired speed for the first 10 miles (each split is 5 miles). I tried to remember to hydrate every 15-20 minutes and eat something every half hour with the hope of preventing myself from bonking. Instead of bonking, I ended up battling muscle fatigue. My legs were losing steam because they were not used to pushing this hard for this long. My lack of “saddle time” was biting me in the ass.

I tried hard to stay focused on giving it my all from beginning to end.  About halfway through the course, I noticed that my average speed was steadily declining. I gave more effort but was achieving diminishing returns. The leg power just wasn’t there to give.  The last 5 miles was a bitch. I really wanted to stop pedaling, lie in the grass and just rest.  At that point, I knew that I had to pedal nonstop, no resting at all. If I rest once, I’ll rest more and begin to relax. I needed to get off the bike and start running. That’s all I focused on doing.

As I pulled into the second transition and dismounted where both of my legs began cramping. My calves were like balled up fists, my quads were twitching and cramping and my hamstrings kept trying to make me roll into a ball. The pain was validation that I’d gone all out and given everything I had. I was in real pain and felt good about it.

Running the 10K with jelly legs.

The fix for exhausted legs (mine were heavy and felt like they’d been filled with cement) is to take fast short steps. This “should” cause the circulation to recalibrate and give life to the lower extremities quickly. They say that this technique works with practice, but I haven’t practiced doing that very often. So, my body is not accustomed to making the transition from bike to run in an efficient manner, so it wasn’t happening quickly. Also, every time I lifted up my legs to take a step I had to endure severe pain and really fight to prevent my hamstrings from going into a full cramp.

For the first 1/3 to 1/2 mile, I was unsure if I was going to be able to run or if I would be consigned to walking the entire 10k? I tried stopping and bending forward to stretch my hamstrings, but that would cause my quadricep muscles to cramp up.  I had to figure out how to run without bending my legs much.

Somewhere between one-half to three-quarters of the first mile, the cramping began subsiding. Taking short steps seemed to be working. My legs were working without cramps but they still felt super heavy. By this time, it felt like the heat was on broil and I didn’t have a water bottle (because I hated carrying it during the last race). I was hoping there would be sufficient hydration stations along the route. Knowing that it was going to be a long hot day I made the decision to run as much as I could.

Along the route, I met people who were doing their first sprint triathlon, and some who were racing to do a fundraiser in memory of an athlete who died during a race in France a few weeks earlier. The friendliness and collegiality never cease to warm my heart.

To my dismay, the aid stations didn’t have sufficient cups or water for all of the racers. At one station, I had the volunteer pour Gatorade in my mouth. In another, I got on the ground and poured water from the big cooler over my head and into my mouth (because, no cups). The volunteers at the stations clearly felt embarrassed but there was nothing they could do. The race organizers have work to do to improve their future events.

During the last two miles, I ran with another guy who was struggling as much as I was. So we encouraged each other to just keep running. We were determined to finish as strong as we could. My son was walking the course backward and met us about 1/4 mile from the finish line. I was taking a long time and they were getting worried. They heard that several athletes had crashed and gotten hurt but didn’t know who. In addition, I was moving fairly slowly on the run. I was exhausted. 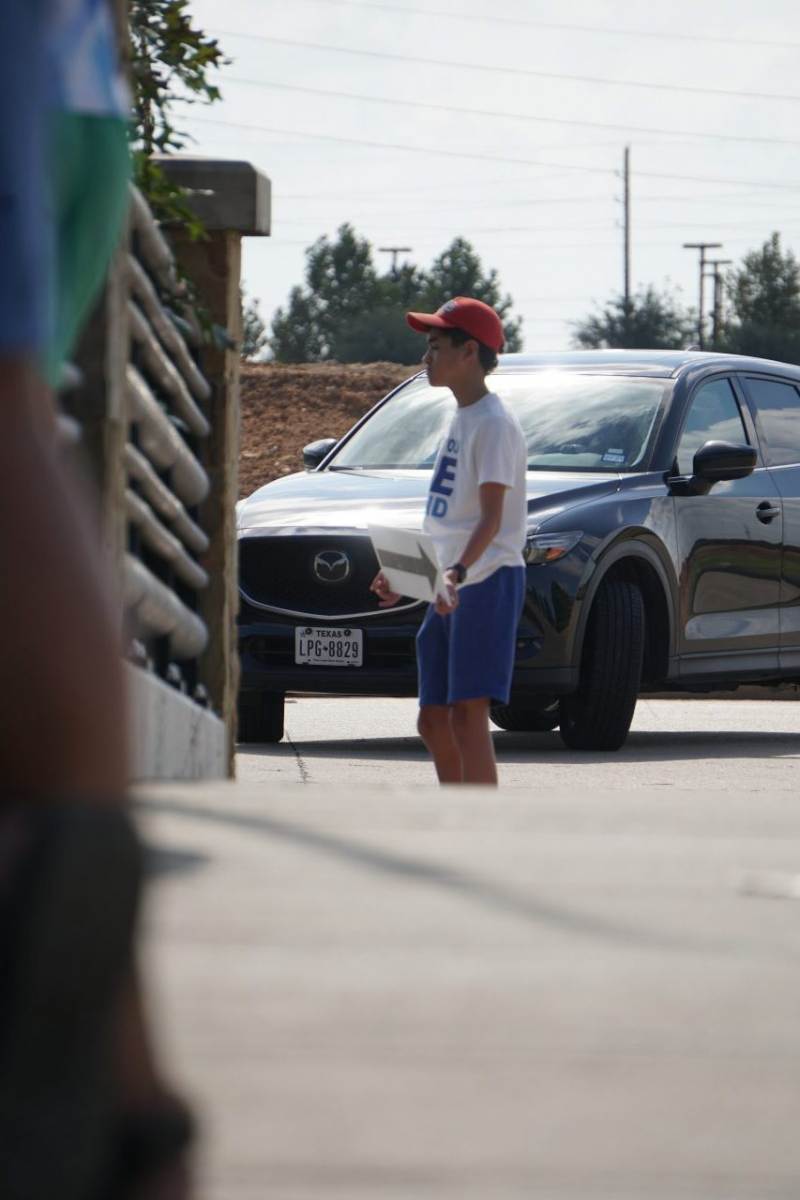 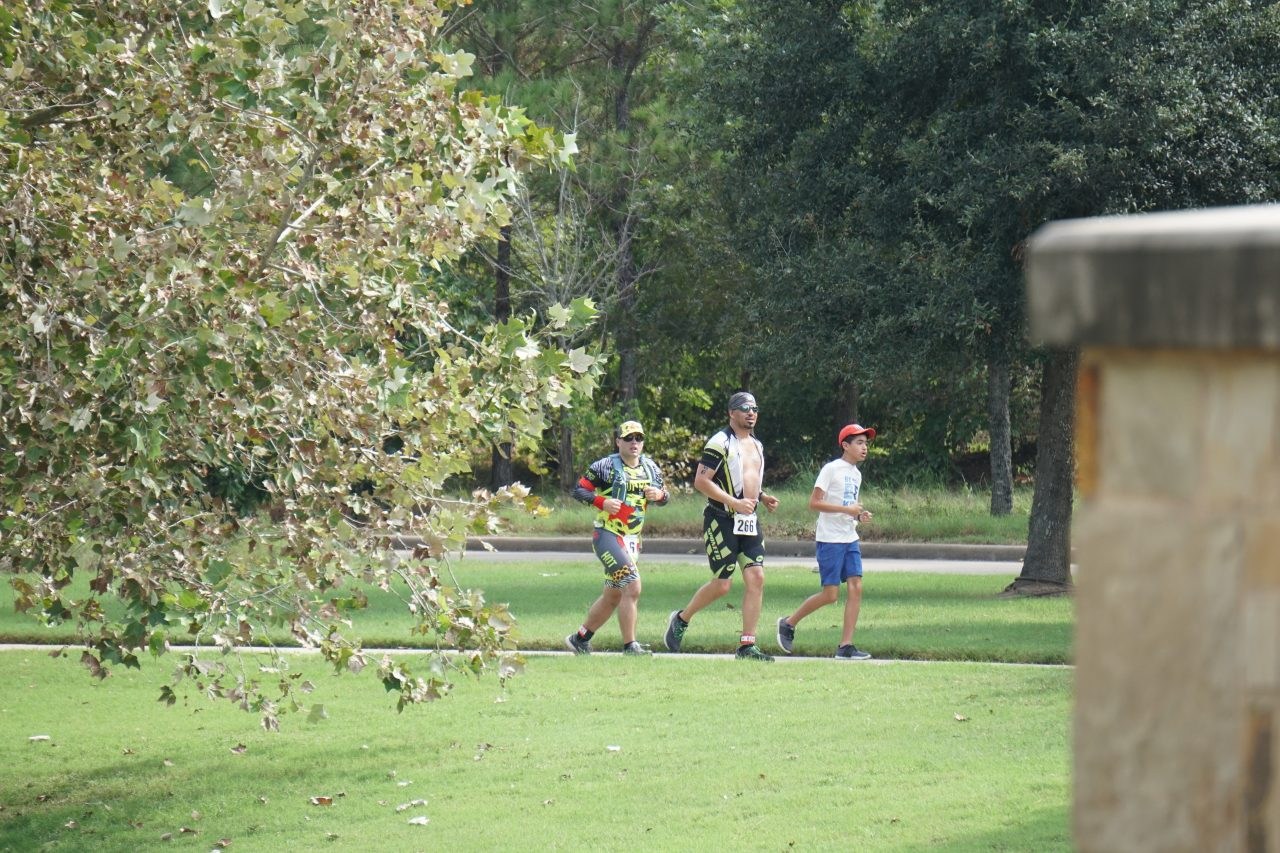 He ran with us and gave us a feeling of excitement as we approached the finish line. We agreed to run as hard as we could across the line…and we did!

I’m grateful for the camaraderie of a stranger.  We suffered together and gave each other the strength to push. I don’t know if I would have finished as strong had I been running alone.

All in all, I feel good about my race performance. I started confidently in the water, suffered and endured a strong, but slightly disappointing bike ride then pushed hard to run through the finish line.

Triathlon season has ended. As of now, my next race is in January, the Houston Marathon. I think I will find a few road races to do in the interim.

Today’s ride was more a slog. It was cold 🥶 a

Glad to get outside and enjoy a quick evening ride

Taking advantage of a beautiful day to dial in my