I was overconfident and underprepared for the race…

If you’ve thought about doing a triathlon, the length of this race is good for you. The swim is 300 meters in the man-made lake at the Texas Ski Ranch, a 14-mile bike and 5K run on the back roads of beautiful New Braunfels, TX. The length of the race is short enough to know that you’ll finish, but long-enough where you can test yourself.

I was excited and feeling fairly confident going into this race. I didn’t feel the normal pre-race anxiety or the subtle desire to find a reason to withdraw from it.

Mentally I was all-in. The days proceeding race day were quite busy. While in Austin for work, I did make time for some running along the trails at Lady Bird Lake. I enjoy outdoor running much more than on a treadmill and Austin is one of my favorite cities. I couldn’t wait to get outside. Unfortunately, I made the poor choice of having a few drinks the night before and was not fit to get up at 5 am to run. So, I had to wait until the end of the day to do it. Typically in South Texas, the hottest times of the day are between 3-5 pm. Despite the oppressive heat, I had a great run and a good sweat. After a shower and some cool downtime, I ate lasagna to start pre-race carb-loading.

Having gotten sufficient sleep, I got up early to focus my mind, have a cup of black coffee and gather everything so that we could hit the road. It was about 5:15 am so the roads were empty and the sky was still dark. I find those conditions very relaxing prior to starting a race. The location was about an hour from our hotel and the organizers weren’t very clear on the directions, so we left early just in case. Typically, race packet pick-up is the day prior to the race. For this event, our packets were only available on race morning.

With about 135 registrants, this is considered a small race – thus race-morning packet pickup was possible.

We were going to swim in a man-made lake that’s also used for motorized wakeboarding and wake surfing… there was a film floating on the surface. The water was very warm, 88° and smelled of boat fumes… Clearly, I didn’t do my homework for this race…

The swim didn’t even begin well

The announcer was also the safety swimmer. He gave a quick briefing, then said we’d start in about 3 min after he got into his kayak. Once in the kayak, someone on the shore suddenly began a countdown from 10. We all bunched up on the shore and started swimming at go. 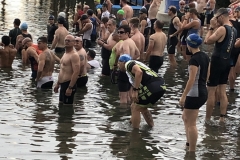 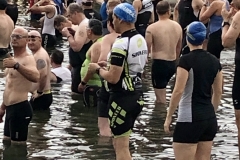 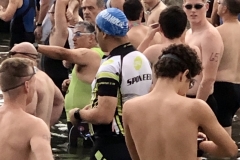 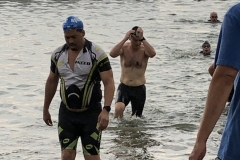 I started off swimming fairly aggressively and at a good, sustainable pace. I swam over a few guys and bumped into a few more as I passed them. The water and fumes began getting to me, suddenly I couldn’t get enough air. I  felt like there was a 50Lb weight on my chest preventing me from taking a deep breath. The voice in my head kept screaming “I’ve got to get out of here. Get me out of here” … I couldn’t believe that I was panicking. For the first time ever, I completely lost my shit!  I tried to keep swimming but ended up treading water and floating on my back more than I was actually swimming.

I enjoyed the bike race …

After exiting the water, I walked to the transition area trying to calm my mind and catch my breath. I was aware of what was happening, I had to figure out a way to calm my mind so that I could get focused and kick-ass on the bike. While putting on my cycling gear and taking in some nutrition, I looked over and saw my wife. She gave me that “what the hell are you doing” look. She began rolling her arms and said, “everyone else is leaving the transition area, why are you still here”? I picked up the pace and got moving on the bike. 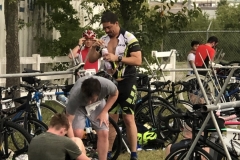 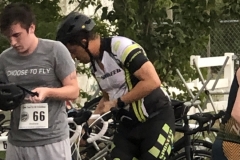 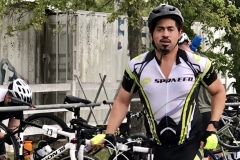 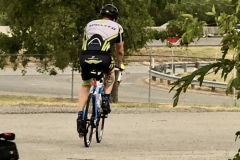 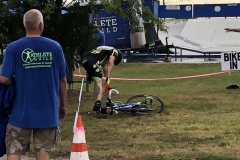 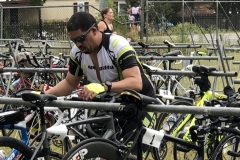 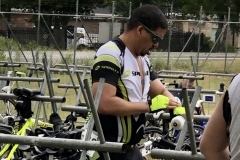 Fortunately, I’ve become much more comfortable riding on the street. Not totally comfortable, but I’m not tense while I ride. Rain was in the forecast and about 20 minutes into the ride it showed up. This is new. What do I do? How well do these skinny-ass tires keep traction on a wet road…? Shrug, immabout to find out. Most of the route was straight anyway. I slowed early for the turns… I didn’t want to test the tires.

While riding I could tell that I was pushing harder than the last race, but I still struggled with its memory. The memory of my hamstrings locking was a huge inhibitor to pushing myself harder… the hurdles of the mind of this sport are serious.

Fortunately, about half-way into the bike course, two guys rode past me. This made me want to push a bit more. They didn’t leave me, so I decided to pass them and see what I could do. I realized they were stronger than I was in the hills, but I could take them in the flat portions. We went back and forth. All three of us were benefitting. Everyone upped their game.

We pulled into transition 2, dropped out helmets and donned our running shoes as fast as we could. 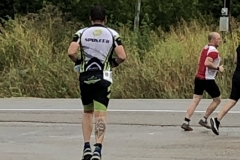 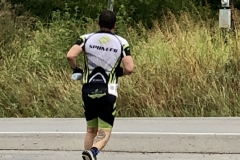 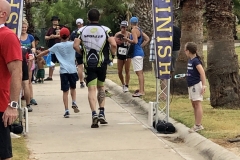 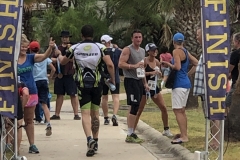 Once out of transition, I set out to accomplish a new goal.. run every step of the 5k. No walking whatsoever. I also had the desire to run faster than a 10 min mile. However, I knew that the two goals were incompatible. If I did run sub 10 min miles, I would have to walk because I would get exhausted. Running the entire time was more important to me. The sub 10-min will would have to wait.

I did it! I ran every step from the transition area through the 5 k and across the finish line.

The 5k time was a personal best (PB) too!

1h 42min .. not a fast finish, but a race filled with lessons. No regrets. 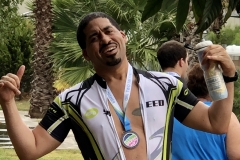 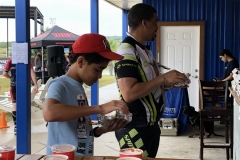 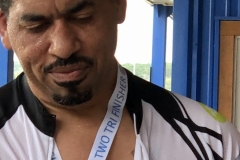 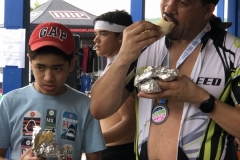 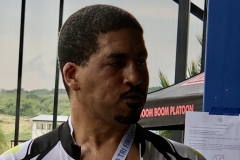 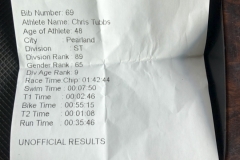 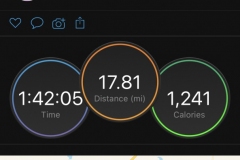 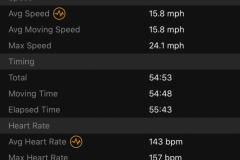 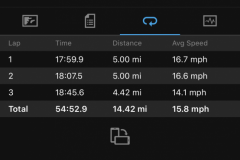 I discussed the race with Johnny and he shared a few nuggets of wisdom. They are listed below along with a few of my personal insights.

This flatlander is about to learn how to “shred” 🏂.

I’m sure that reality will be very different than what I’m imagining 🤣🤣.