Pushing through the second half of the race

At mile 14, the sun was up and I was near the Galleria. There were no tall buildings to block the sun and the wind had calmed down. I felt a sense of peace and gratitude as I looked around and absorbed the moment. This part of town was very familiar, but I’d never seen it as a runner. I noticed the slope of the streets, the contours of the sidewalks and even the pieces of debris strewn about. Everyone there was fighting their own battle for their own reasons. Some were bouncy like gazelles others were running like linebackers where every step seemed to cause a vibration that penetrated the earth. Around mile 14 point I noted that my energy level was still good, no real fatigue and my legs were feeling relatively strong. I think those miles of doing run-walk were a good idea. My pace wasn’t slowed, yet my body was fresher than if I had run the entire 14 miles.

Then I saw Merri, another Ironman athlete. I’ve trained with her on occasion and even watched her run a half-Ironman. I have tremendous respect for her tenacity and athletic ability. As I approached, she seemed to be struggling. I called her name and gave her a big “glad to see you out here” smile hoping to give her a little of my energy. We chatted a bit and then parted ways. I stopped to see my wife and son and change shirts and Merri kept running.

Since I sweat like a human sprinkler, I thought changing shirts about halfway into the race would feel good and save my nipples from the friction of a soaking wet shirt (see my road rash post), so I asked my wife to meet me somewhere after the midpoint. We met at mile 15 and I changed shirts. She said our son didn’t want to get out of the car, he told her that he was hibernating. We snapped a few photos, she told me to pick up the pace and I got back on the road.

The next four miles were unremarkable. We ran through the memorial area where there were a few people on the streets cheering. The pack of runners had become very thin. Many were walking or standing on the sidewalk stretching their legs. Leg cramps were hitting many people. Booth Lisa the nutritionist and Johnny, my coach, reminded me to bring Base Salts to prevent cramping. The issue is with excessive sweating is the rapid loss of electrolytes. When they get low the muscles get unhappy and cramping ensues. If I catch the depletion early and take some salt, I’ll stop any cramping that has started. But, If one tries to push through and neglects to re-supply the body with them, they are in for a world of hurt.

All experienced marathon runners describe a point in the race where they hit “the wall”. All of them. Everyone.

Mile 19 was my introduction to the wall. I describe it as “the tormentor” because that’s exactly how I was feeling…tormented. I am constantly reminded that life enjoys laughing at you when you don’t listen. Those of us with hard-heads and extra-fierce determination know this reality very, very well. Throughout my training, Johnny told me that my hamstrings and my gluteus (ass muscles) were very weak. I was told to perform daily exercises to strengthen so I wouldn’t have issues running. I heard him, but I didn’t understand the gravity of the instruction. What I did know is that I was able to run longer and feel better and be less sore when I ran. So, things must be fine, my hamstrings and gluteus are getting stronger on their own….right?? Nope. not even close.

Why is this an issue? The gluteus and hamstring muscles are big stabilizers and should be engaging while running to maintain proper form. When they don’t the quads work too hard and the hip flexors get tired resulting in poor form (and causing further deterioration in form). This results in the tendons and the knee moving slightly off-angle and becoming irritated and inflamed. I believe that runner’s knee is what many call this phenomenon. For me, it developed into excruciating knee pain. Every time I lifted my leg to take a step, it felt like a knife was being jammed into the side of my right knee. Although it felt like a knee issue, I knew that it was most likely my IT band rubbing against my tibia for far too long and becoming severely inflamed. The side of my knee had become tender to the touch.

The pain led me down a dark mental hole. I began questioning everything. My goals, the ironman, what’s possible… all kinds of shit. Fortunately, I’ve been practicing being aware of my self-talk , so I didn’t get too deep into the negative thoughts. I acknowledged that I was feeling down and recognized why I was in pain and suffering.

I was living the result of my choices.

I chose to ignore my coach and neglected to strengthen my leg muscles. I also chose not to run more than 16 miles before attempting the marathon. So, all of the pain and anguish that I was experiencing was expected and warranted. I had no one or anything to blame. So, in my moment of accountability, I knew that to finish this race I needed to make a decision. Either decide to finish or decide to try and finish. 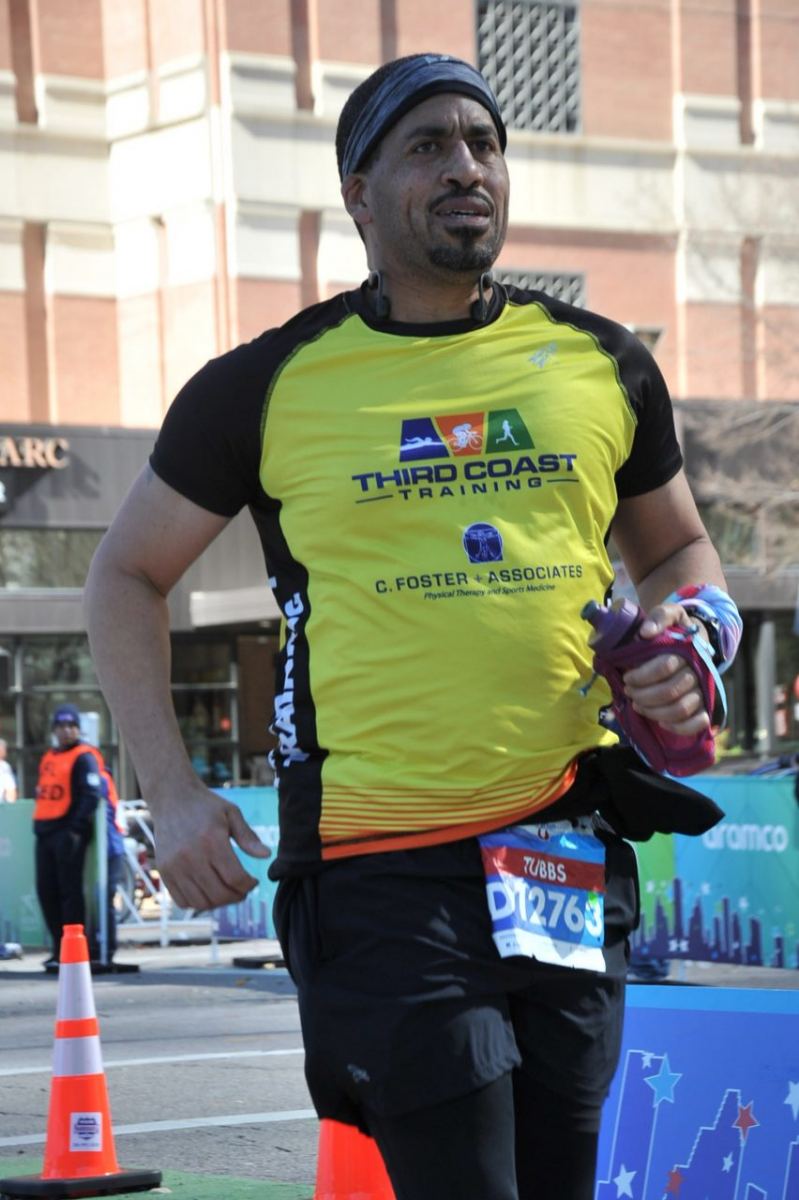 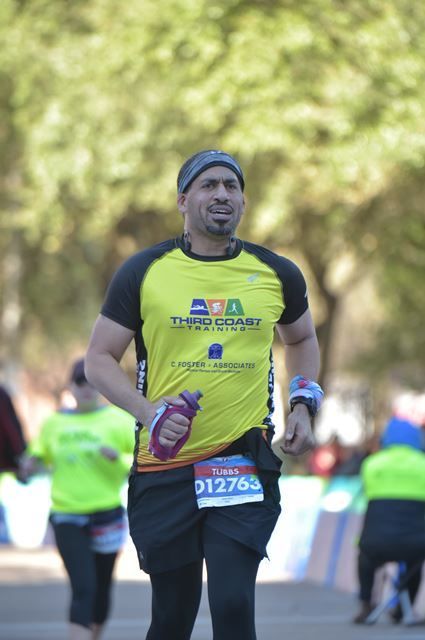 Although 4 miles seems trivial in the context of a marathon, they were the most agonizing 4 miles I’ve ever run. Along the way, I did have some help. At mile 22 and mile 24, I think, there were two beer stations. I’d never indulged in beer while running, but I was willing to try today.

Oh my god, the beer was the most refreshing thing I can remember drinking in decades. I only drank half a cup at each station and it took all the pain away. My body felt refreshed and full of energy again. Why? I don’t know. I didn’t question it, I took advantage of the feeling and ran faster for a while. Why not close the gap to the finish line while feeling good?

The pain returned and the struggle to move forward intensified quickly. Making a mental commitment to finish was probably the best thing I could have done. I never once questioned my ability to finish. I only spent time thinking about how fast I could get there and could I find a way to enjoy myself in the midst of the pain.

As we moved back downtown, the fences and corrals came into view. The feeling of “almost there” became a strong driver to push hard and dig deep. I wanted to run across the finish line. So, I was trying to gauge my ability. Could I run a full mile, half-mile, what? I tried but couldn’t run a whole mile or even a half-mile at this point. So, I walked fast until I saw the finisher’s funnel. The place where the fences and the mats were headed right to the finish line. The crowd had thinned but I could still hear the cheers and the announcer calling people’s names as they finished.

I ended up struggle-running right next to a woman who’s name was Christine. We looked at each other acknowledging the pain and agreed to run through the chute together. Feeding each other.

While making the last push, I saw my family, smiled and then focused on getting across the finish line and listening for my name. 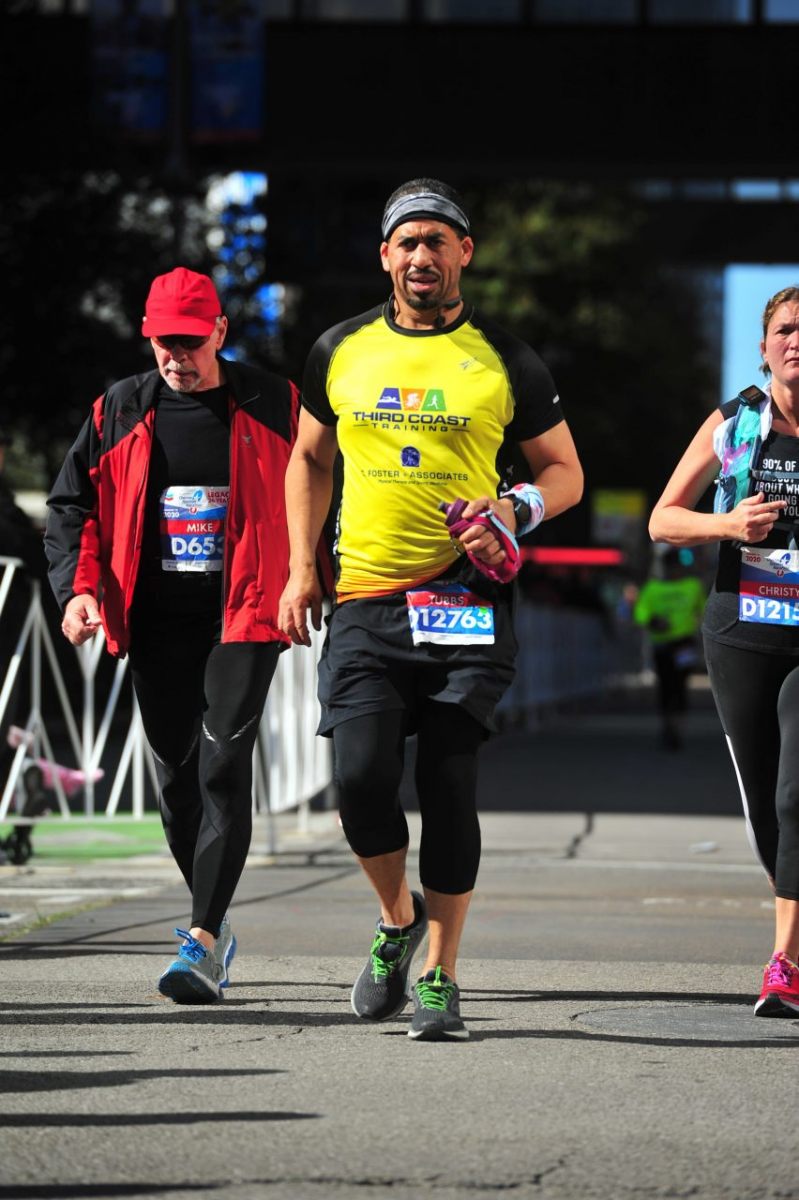 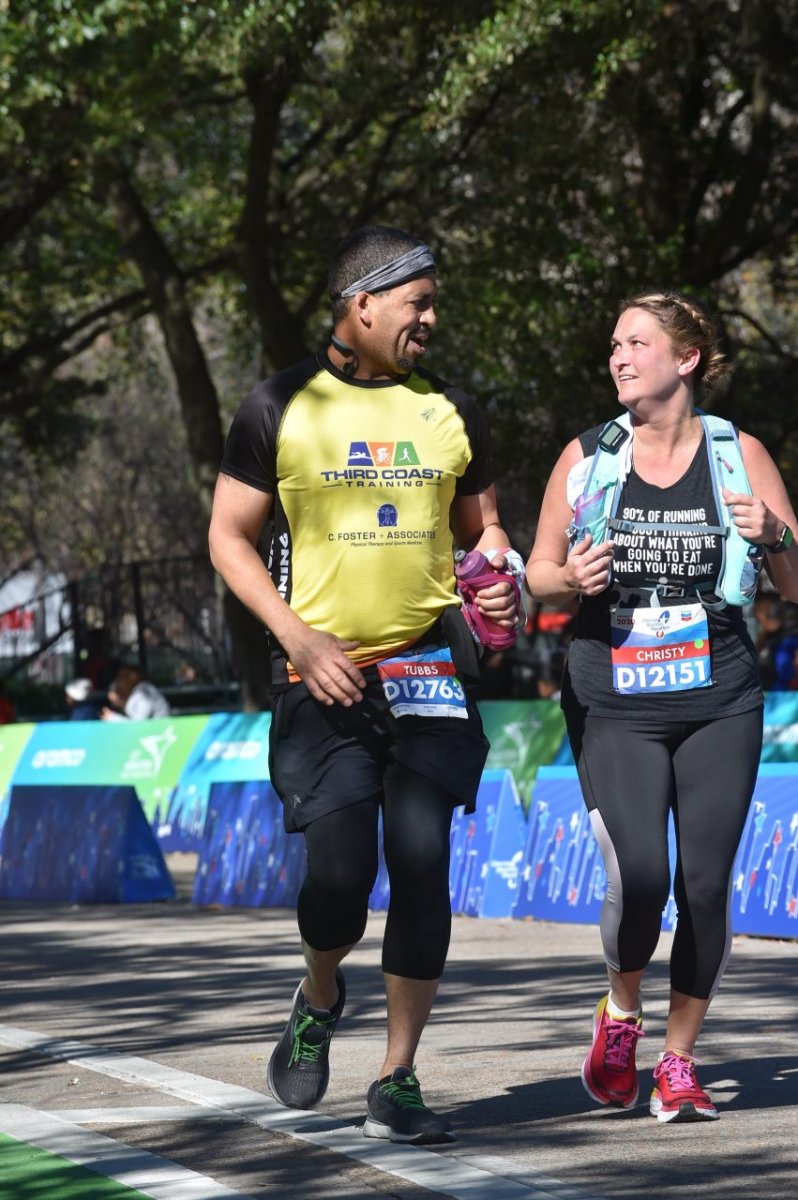 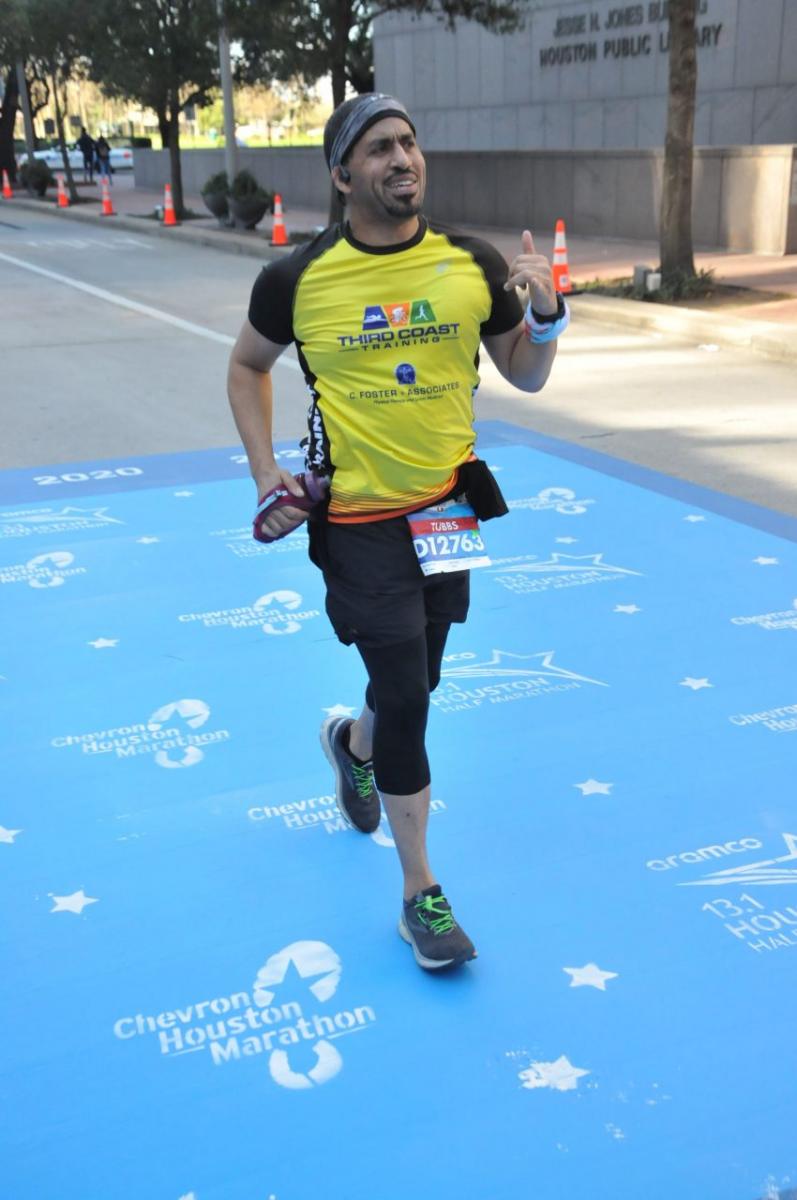 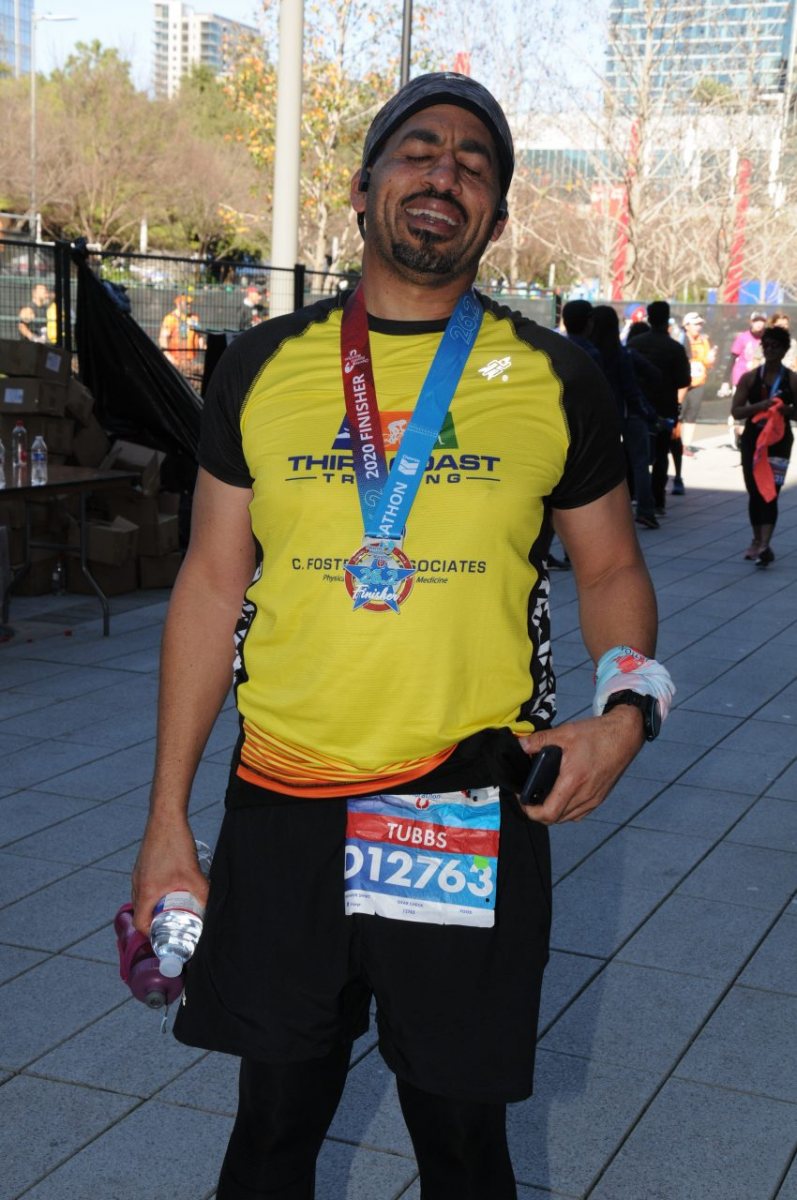 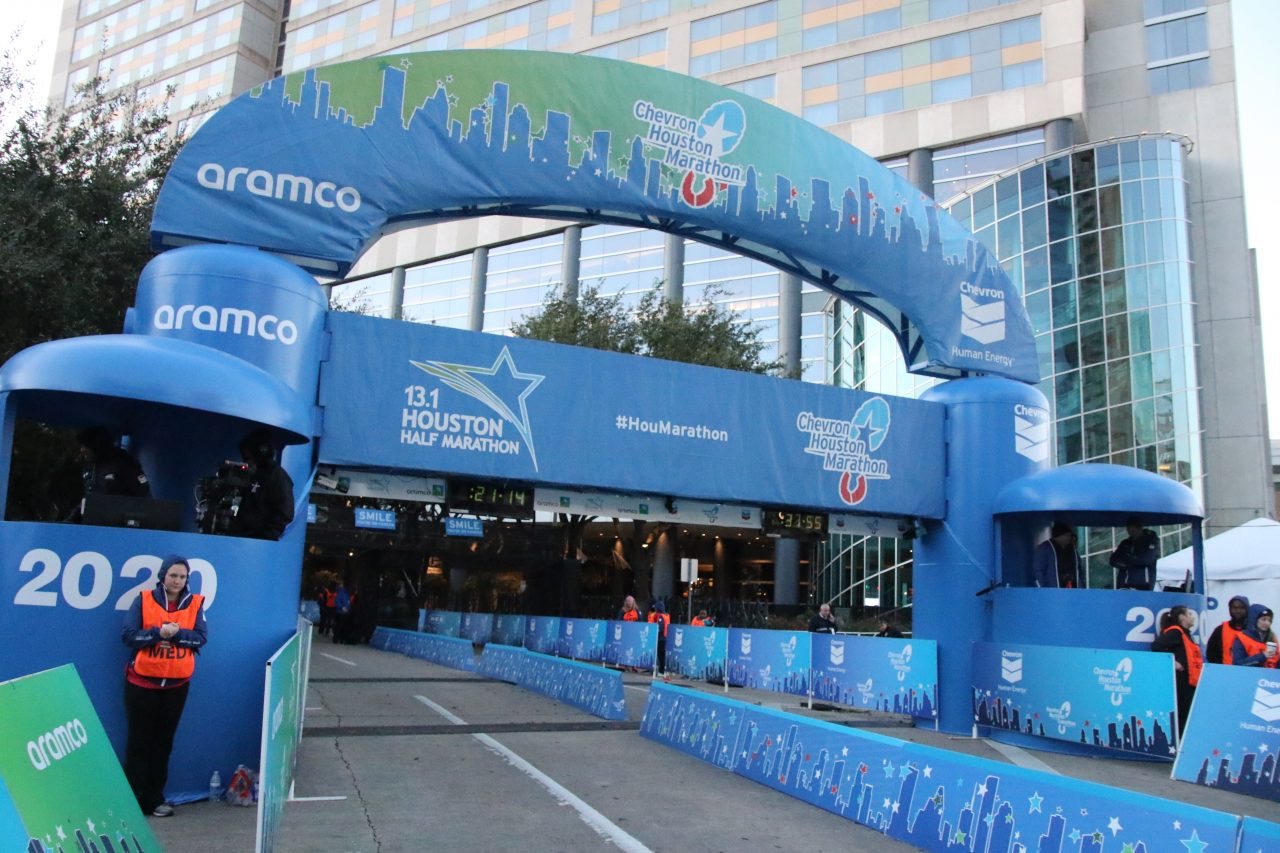 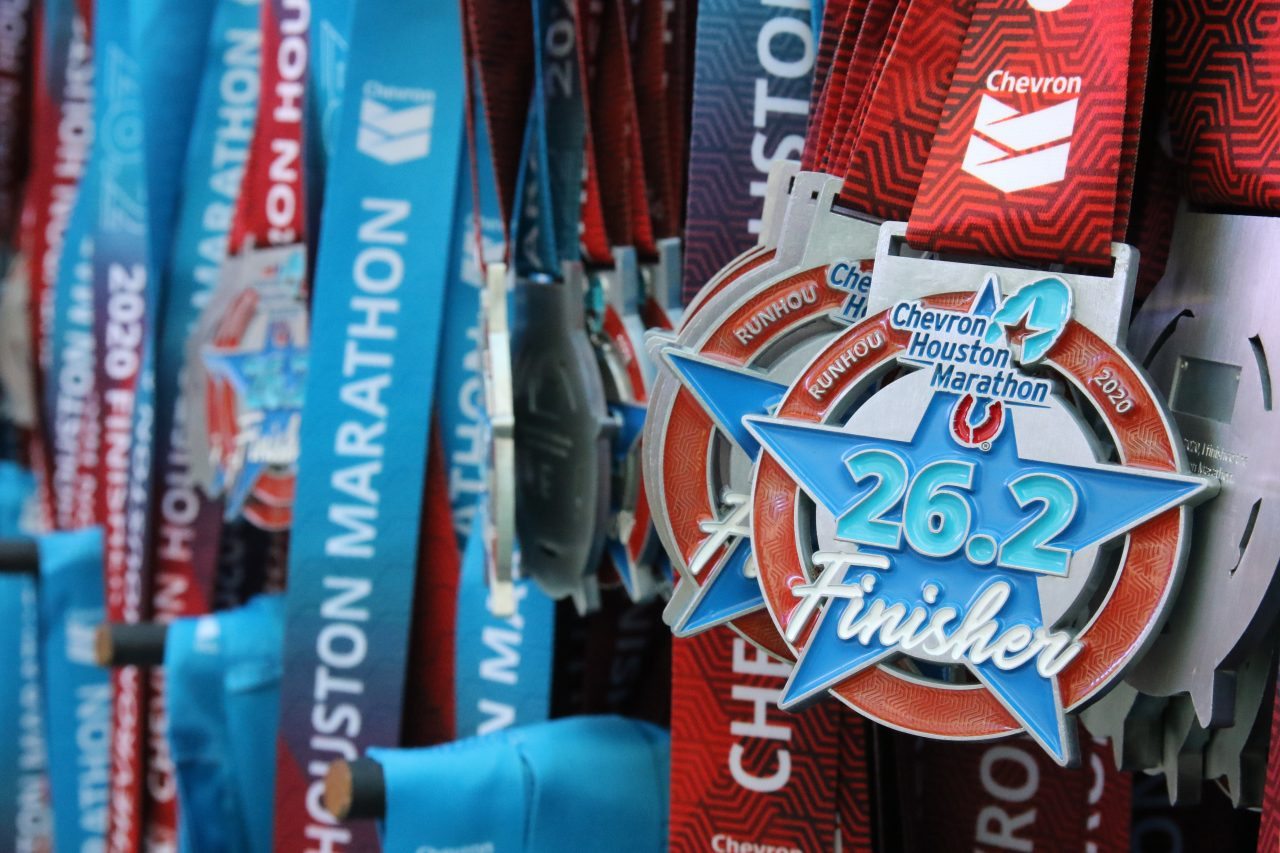 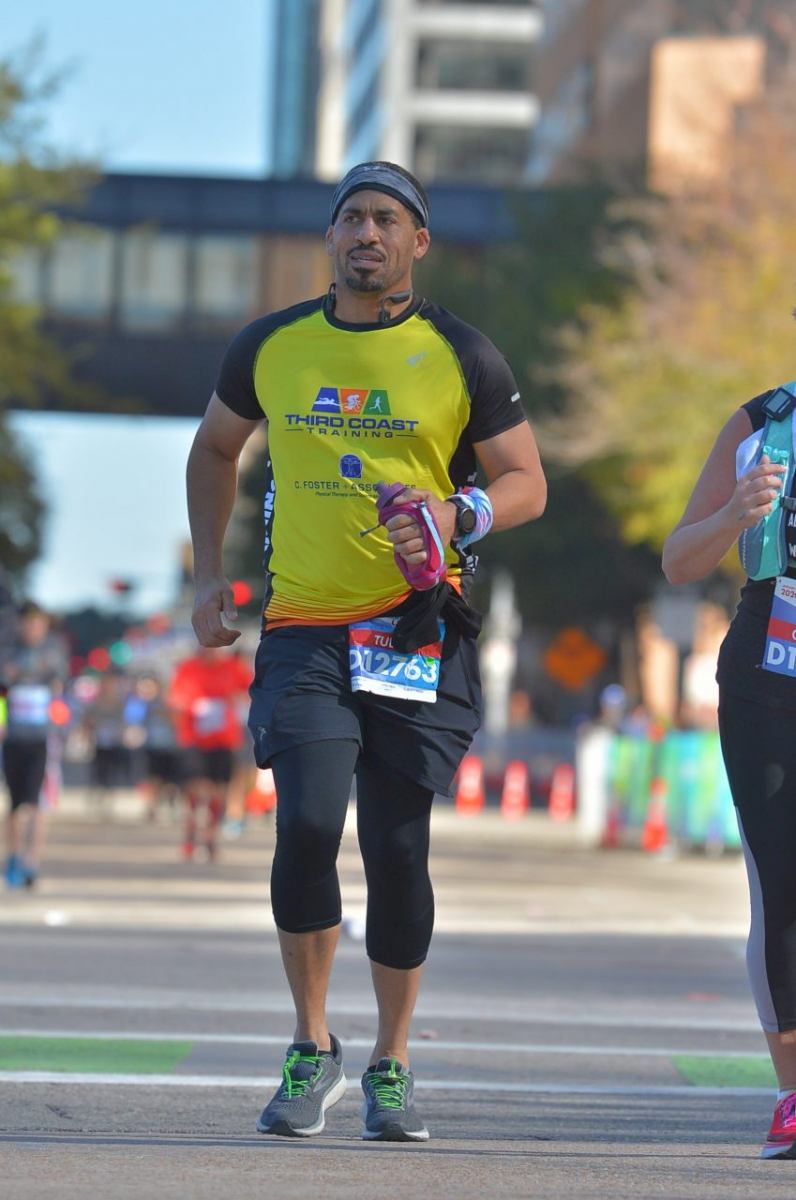 The race was over and I won!

As I crossed the finish line, I made sure to run until I passed the timing mat. I’d squeezed out the last ounce of push had. My body went into a full rebellion and all I could do was smile.

Then, about 10 steps past the finish line, a wave of emotion washed over me. All I could do was cry. I knew it was going to be a powerful ugly face moment, so I stopped and put my hands on my knees…I didn’t want any stray photos of an ugly-faced sob session. I didn’t even try to stop it, I let it flow and it felt awesome. So many emotions emerged at the same time. Joy, disbelief, gratitude, pain, sorrow that it was over and many others. As I was bent over, a medic ran to check on me. I told him that I was just overcome with happiness.. He urged me to keep walking so that I wouldn’t risk getting lightheaded and passing out. I listened and as I stood back up, with tears streaming down my face a woman happened to look at me. She stopped in her tracks and said I don’t know you but I want to give you a hug 🤗. I nodded and we hugged. She shared herself to help support a stranger in his moment of need. People can be beautiful.

Trying to stay on my feet

I was supposed to meet my wife and son in the family area of the George R. Brown convention center. The problem with that plan became evident as I attempted to walk from the finish line to get inside the convention center… walking was horribly painful. The family area might as well have been in San Antonio. Every step was agonizing. All I wanted to do was to sit down and close my eyes. I knew that I should keep moving.

I made my way to the gear bag station and put on my flip flops. My feet and lower leg muscles immediately began cramping, so I put my running shoes back on my feet, desperately trying to avoid a full-scale foot and lower leg cramping event. I sat on the floor to stretch my legs for a while, but the act of getting back up made me light-headed and initiated the cramping again. I had to remain upright for a while. Shit!

Eventually, I made it to the meeting spot, we hugged and snapped a few photos, then slooowly made our way to the car. I didn’t have any interest in the post-race activities or finding any of the other racers that I train with. I was ready to get off my feet and get some pain relief at home.

Once again my “crew” was there for me… they were up early, moved around the course to cheer for me and provide gear and nutrition as I requested and then take me back home. THANK YOU.

The 3rd and final post in this series will be a summary of my thoughts about my prep, what I took from the experience and what’s next.