Although this was not my first Triathlon, this was my first one of the year, and more importantly, the first time that I’ve trained prior to a race. Leading into this one I felt ready. I had some specific goals for the race. In past races, I just wanted to finish. I would show up and go. Not this time. This one was much more deliberate. And I was excited about it.

This was a Father’s Day race (Sunday).  On Saturday I drove to Austin and picked up my race packet. I wanted to see the course before the race. In the past, I’d never even bothered to look at the course map much less gone to the course before race day. Consequently, I had no feel for the layout or dynamics of the terrain. That was a bad, arrogant approach.

So, after picking up my packet at Dick’s Sporting Goods I drove to the course with three objectives:

After driving the course, I went back to my hotel room and laid out all of my gear. Then I visualized going through the race – event by event. I imagined what order I would perform each action in the transition area. This helped me figure out how I arrange my gear in the transition area. I took the time to envision myself struggling physically and what mental battles I’d have to grapple with as fatigue set it. I took myself to the finish line.

I’ve done this process for most of my life. I did it in graduate school and during advanced SCUBA training and it served me well. I also do it before I give talks or anything that I know will generate anxiety or self-doubt. It’s my pre-race procedure. I find it soothing in a way. It also helps to keep my ‘why’ in focus.

On Saturday afternoon I wrote down specific paces and overall times that I wanted to achieve for the race. See the photo below.

For those that don’t read chicken scratch…

What do I eat?

They say that for triathletes, nutrition is the fourth discipline.

Although I have a Ph.D. in Biochemistry, I am quite ignorant about nutrition. In particular, performance-based nutrition. The more I focus on fueling (eating and drinking) optimally, the greater my sense of nutritional ignorance. This truly is a separate discipline and it is just as important as the swim, bike or run.

Unfortunately, I didn’t give a whole lot of thought around eating on Friday or on Saturday. I winged it.

Do I eat clean and lean – salad and grilled fish?

Do I eat carb-loaded food – Pasta? Is a cream sauce ok, or will that produce mucus or provide too much fat so close to race day? Should it be a tomato-based sauce? Or lightly oiled with veggies?

Are desserts ok? Sugar is good for energy before a race, right?

I ate some cajun pasta with chicken on Saturday with a Dos XX lager. No guilt, a very happy mouth, and a full belly. I did eat early so that I wouldn’t be full late in the evening. I wanted to get good sleep (I knew that was unlikely because of the pre-race jitters).

As I anticipated, I didn’t sleep well at all.  I got up and donned my tri gear. My bag was packed already. I grabbed my banana and got a cup of coffee in the lobby. It was still dark outside and there was almost no one on the road. What a peaceful way to start the day. The temperature was warm, but not hot and very low humidity. I rode with the windows down so that I could breathe in the beauty of the moment. My day was here and I was present and ready.

Last year, I arrived about 10 min before transition closed and I had to find any place and squeeze in. This year, part of my plan was to get there shortly after transition opened so that I could choose a good spot for my bike and gear. I also wanted time to think about how to layout my stuff. The bike gear in front of the run gear? Where to place my nutrition and fluids? Those little details help to offload some of the mental tasks from the actual race. I find that I’m less stressed and can get out of the transition a little faster with a bit of pre-planning.

I had the pleasure of meeting and chatting with a few other racers while I was setting up. The camaraderie of this community is wonderful.I began feeling at ease and connected to the race… what a great way to start. I realized that although almost everyone out there was a competitor, they were racing against themselves. Sure, we all see ourselves relative to other participants. But, ultimately, we are pushing against personal goals. It may be to complete the event, pace certain legs within set times (my goals), beat a specific person, or get to the podium (overall or within a specific group).  It’s you against you.

Overactive butterflies in my belly…

After getting transition all set up, I had an hour before my group was scheduled to start. The idle time coupled with the energy of the event started arousing my inner junkyard dog (he is my competitive spirit). He was just laying down resting peacefully. Then, suddenly, he raised his head and his ears got perky as he looked around. What’s all this activity? This energy all around us? People have this look in their eyes… He gets up and starts pacing the floor….he was awakened…

Johnny explicitly told me…you are not competing to beat the other racers.

That’s the value of a coach. In the past, I would always go hard on the swim (that’s where I’m most proficient and comfortable) then dialed it waaaay back on the bike (my lowest level of experience and proficiency) then run however I could.

After he explained the rationale for his instructions, I was all in. I will follow the plan.

To calm the junkyard dog, I found a grassy patch and did some stretching and breathing. I needed to maintain focus and presence. I wanted to stay on task and follow the plan, not get caught up in the competition with others and fuck it all up.

My wife and son showed up about 30 min before the scheduled start.

He’s completed one tri and she’s an experienced triathlete with many sprints under her belt. We decided years ago to demonstrate healthy, active living for him. This is an extension of that effort.

She caught him giving me my pre-race pep-talk. I love his intensity. 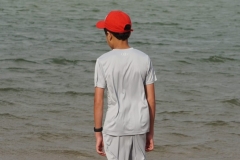 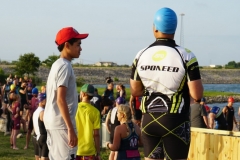 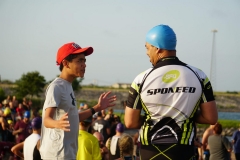 I knew that I wasn’t the slowest swimmer in my age group so I lined up on the inside near the front of the pack. As they began counting down, I felt my confidence slip away.  I ended up letting everyone go before I started my swim.

Looking back, that was the first real indication that this was a battle against myself. The latent fear coupled with my self-talk were plotting to hold me back. Trying to keep me from performing at my best.

I stayed focused on my swim goal, I just made it harder because I kept swimming into the slower people in my group. You know, those same guys I let go before me because I was reticent to stay where I knew I belonged.  Also, there was a 10 mph headwind that morning. The lake was very choppy and we were swimming into the wind (and the waves). Breathing without sucking up water was difficult for me.

Eventually, I broke away and settled into a rhythm. Not too fast where I was losing my ability to breath, but not so slow that I wasn’t pushing myself and feeling the exertion. Sighting was more difficult than I anticipated. I didn’t practice it enough prior to the race. I did some pool practices, but not once did I get into a lake and practice doing it.  Another lesson learned.

I had to roll on my back a couple of times to regain my composure. Once for excessive choking, the other to calm my mind for a moment. I was getting lost in the chaos of the pack. I find that a quick roll and float on my back serves to calm the nervous system and is good for re-focusing my mind.

At the half-way buoy, I felt good. I was winded, but I didn’t feel exhausted. I knew that I could maintain the pace for the duration.

Then, suddenly, self-doubt crept into my head again…What I heard was this…. what kind of fool are you? You are winded doing a 500-meter sprint swim. What makes you think that you are capable of swimming a full Ironman 2.4 miles? You probably will barely even complete the Olympic distance in October…. blah, blah, blah…..

I caught it as it was happening. I knew that I had to redirect my thoughts or I’d continue to slide into a negative mental hole… I acknowledged that I had a lot of work to do to be ready for those longer races. But, right now, in this lake, I was going to do my thing and meet my objectives. I’m going to pay attention to how I’m breathing. Am I spotting? How’s my balance and body position in the water? What can I improve right now?

It worked. I was back in the race

I was approaching the exit and decided to turn it up a little bit. To finish the swim strong…. 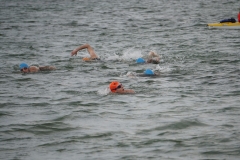 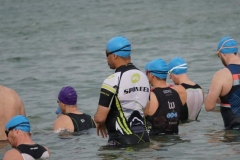 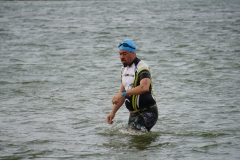 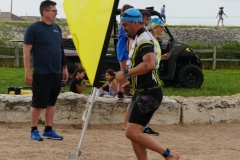 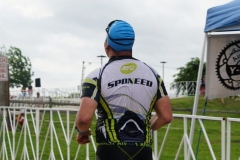 Transition to the bike

In the next post, I’ll discuss what happened when I left the water and got on the bike. I’ll also share the unexpected challenges of running after going all out on the bike.

This flatlander is about to learn how to “shred” 🏂.

I’m sure that reality will be very different than what I’m imagining 🤣🤣.