The tension between pushing hard vs riding to plan

As my next two Ironman races approach, the training volumes are increasing. Now, I’m running for 2.5-3.5 hours at a time and biking for 5-6 hrs. Fortunately, Johnny has these long sessions as low-moderate intensity. The high-intensity, speed training sessions are rarely longer than 1 hour. I’m in the endurance-building phase.

Last weekend, on a whim, I rode 100 miles and felt good the next day. Yesterday, I planned to ride another century (100 miles), but I wasn’t sure who if anyone from the club had plans to do the same distance. I was prepared to ride solo.

My goal for the day was to execute the ride as if I was completing an Ironman race. For me, race rehearsal rides are different than regular group training rides. The two require different mindsets.

Group rides are more pack-energy and mentality. You stay together and push one another. The ride typically begins easy and quickly increases in intensity and eventually falls into the category of shared suffering. Doing these rides is beautiful because we push and pull each other. We hurt and keep going, often making performance breakthroughs resulting in increased confidence and cycling capabilities. Throughout the experience, bonds are forged and memories are created.

Endurance triathlons, however, are not high-intensity activities. They are too long and becoming exhausted from an all-out effort will ruin your chances of completing the race well. I must always remember that cycling is only one of the three disciplines and the effort while riding must be properly managed. Going hard and fast feels great, and with adequate fuel, can be done for most of the 112 miles. The issue, however, is the toll on the leg muscles. Once we finish riding, we put on running shoes and pound the street for 26.2 miles in the heat of the day. A marathon is grueling when run on fresh legs as a stand-alone event. Attempting to run a marathon after being up for 8 hrs and moving your legs non-stop feels like a herculean endeavor. To provide a reasonable chance of having a good run, the effort on the bike must be scaled back considerably.

As much as I enjoy the energy of a group, I often prefer to ride alone or with only 1 or 2 other people who are of similar capability. In my experience, egos reign supreme during group rides, and people begin trying to push limits. When this happens, I have to choose; stay with the group or ride my own ride. Most of the time I choose to ride my plan. I always feel a sense of loss and envy as I watch the group pull away.  During these moments I appreciate coach Johnny. He told me in the beginning that I would need to be careful when I ride with groups. He recognized my internal “junkyard dog” and knew that I’d be drawn to ride harder than the plan. These are fun, but not really beneficial to my overall training goals. I take comfort knowing that pulling back and remaining focused is the best long-term choice. 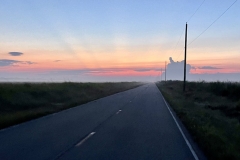 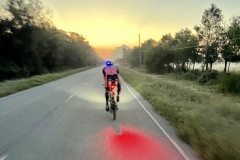 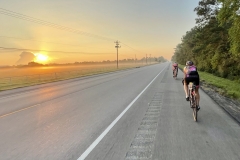 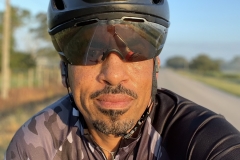 The group was large this morning, I counted 16 people. At least nine were planning to ride 100 miles, so we all started together. The sun hadn’t risen and I enjoyed watching all the headlights bouncing around the street. While riding next to Khon, one of the faster members, I asked him what power he was pushing since we were moving at the same speed. I was amazed that while I was pushing 180 watts, he was at 135. It was then that I realized a disadvantage of being a bigger athlete (he’s almost 50 Lbs lighter than me). I’m absolutely capable of riding as fast as them (the A-group), but it requires me to work harder (effort is measured in watts) the whole time. Since my plan was to ride between 165- 189 watts, I had to choose between riding with the group or riding my plan.

Since the group was pulling away, I told him to go ahead, I was going to ride according to my plan so I won’t be with the group. He laughed and said you are just too big, you are like a parachute creating your own drag. I shook my head in agreement as he pulled away then settled into a groove and prepared to ride solo for 5-6 hrs. The air was cool, but the humidity was still high. My mind turned to doing regular check-ins – cadence, breathing, body position, power, repeat.

As the sun began to rise over the horizon, I made sure to be fully aware of the birds and the breeze. When I get to watch nature wake up while I’m exercising I feel a special sense of peace and contentment. I wasn’t moving particularly fast, just staying within the range of power for the day. There was no rush to be anywhere at any particular time. My intention was to focus on executing a great ride by taking nutrition and fuel correctly and paying attention to how my body responded along the way.

At some point within the first 15 miles, Tony and Angie caught up to me. Tony yelled “ride with us” we aren’t racing! Cool, so I fell in behind them. Tony is normally one of the leaders of the A-group, but today he was riding with Angie who was preparing for her first full Ironman. This was her last long ride before race day. I felt a sense of relief because I wouldn’t have to ride alone all day, nor would I have to push outside of my power zone too frequently to stay with them.

We decided to ride the first 50 miles non-stop. This is beneficial to Angie so that she can get used to going until the halfway point (56 miles) in the race. At mile 56, she can stop and collect items from her special needs bag (nutrition, fuel, clothing, etc) for the 2nd half of the bike course. She’s done half-Ironman races, so she is familiar with the distance. But practicing race-day routines is always helpful.

At the marina, our halfway point, we saw all the others from the group. Some had arrived early and were leaving as we were coming in because they took a shorter route. The faster A-group came in after we did because they took an alternate route and stopped at a kolache shop to grab some food. We bought a few gallons of water and a big bag of ice so that everyone could refresh their bottles and cool off. During the ride back we would be going into a headwind and it would be much hotter so having cool drinks is important.

Getting out of my own way

Overall, I felt strong as we left the marina. As we pushed into the headwind, and I realized that it was coming from the north, my brain flooded me with doubt and started with the regular bullshit. I began thinking that I might not be able to maintain my prescribed effort for another 50 miles. My legs will tire and maybe I didn’t bring enough fuel. Hesitation began to creep in and I began easing up to get comfortable. danger, danger my mental alarms began sounding off.

Comfort is the enemy

The internal discord bubbled to the surface and made me mad. I wanted to be just outside of my comfort zone, I knew that sticking to the plan is how I grow. Part of me was afraid and wanted to move into a comfortable pace and do what would be easy. Fortunately, I was not alone. I had two riding partners and I didn’t want to slow them down. They would have waited for me if they thought I was struggling.

Instead, I made the commitment to focus on sticking to my plan and allowing the doubt to run their course because I have done these rides and made it to the end just fine. Sometimes the last 10-15 miles is torture, but it is entirely doable without falling off of my bike. Also, I didn’t want to be seen as a quitter or someone who doesn’t have the grit to get it done. Ego was my friend in this circumstance.

As we traveled back “home” I noticed that, unlike the other rides, my legs were not cramping, nor did they feel particularly fatigued. My main issue was the rubbing and chafing of my upper inner thigh on the seat. I hadn’t reapplied enough chamois cream when we headed back from the marina.

As the morning progressed to afternoon, the sun beat the shit out of us. Instead of riding the whole 50 miles back in one shot, we stopped at 80 miles to get ice, cold drinks and refill our bottles. Warm energy drinks are gross🤢, and taking a few minutes to put some ice down our backs to cool off helps tremendously during the final grueling stretches of the ride.

Angie was suffering but keeping it together. I could tell that she was pushing through fatigue. These moments are perfect for being in a group. Those who are stronger or feeling better on that particular day will support and encourage anyone who has hopped onto the struggle bus. We don’t let them stop, we help them realize that they have what it takes on that day.

Keep pushing, we do hard things!

We made it back feeling relieved and a great sense of accomplishment. I wasn’t too fatigued and had avoided any cramps which means I got my nutrtion correct! I love to drink a cold beer after a long ride. Luckily, Angie and Tony had them.

I’m the face of Ironman this week